Apple today seeded the second beta of watchOS 7 to developers, the newest version of the watchOS software designed to run on the Apple Watch. The second beta comes two weeks after Apple released the first beta following WWDC. 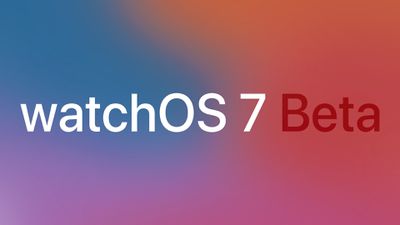 To install the beta, you will need to download the proper configuration profile from the Apple Developer Center. Once the profile is in place, the ‌watchOS 7‌ beta can be downloaded through the dedicated ‌Apple Watch‌ app on the iPhone by going to General > Software Update.

To update to the new software, the ‌Apple Watch‌ needs to have 50 percent battery life, it must be placed on the charger, and it must be in range of the ‌‌iPhone‌‌. It would be wise to install the beta on a secondary device rather than a primary device as this is an early version of the watchOS software that could have bugs that still need to be addressed.

watchOS 7 brings a new watch face sharing feature that lets you share your watch faces with others through Messages or Mail, the App Store, through websites, or through social Media.

There are new Chronograph Pro watch faces, as well as a filters option for the Photos face and rich complications for the X-Large face. Developers can now offer more than one complication per app, and Apple has introduced new complications for Shortcuts, Moon phases, the World Clock, and more.

‌watchOS 7‌ introduces a new Sleep Tracking feature for the first time that uses the ‌Apple Watch‌'s accelerometer to detect small movements associated with breathing when asleep. The feature provides information on sleep duration and offers a Wind Down feature for helping users get ready for bed to increase sleep times.

Putting the Apple Watch in Sleep Mode turns on Do Not Disturb and automatically darkens the watch screen while you're sleeping, while an alarm feature uses haptic feedback or gentle sounds to wake you up with a greeting and a weather report.

In addition to Sleep Tracking, Apple also added a new handwashing tracking feature to help people wash their hands for at least 20 seconds. There's a 20-second countdown timer that comes up whenever the ‌Apple Watch‌ detects handwashing motions and sounds. The Health app will also show the frequency and duration of the user's handwashing.

Additional details on everything new in watchOS 7 can be found in our watchOS 7 roundup. ‌watchOS 7‌ is only available to developers at the current time, but Apple plans to offer a watchOS 7 public beta this month.

FishyFish
So good, folks, SO GOOD. Smooth and problem-free, my watch is running like a dream on beta 2. I love watchOS 7!!
Score: 2 Votes (Like | Disagree)

Johnny907
Battery drain seems to be improved in this release. Appreciate that.
Score: 1 Votes (Like | Disagree)

So good, folks, SO GOOD. Smooth and problem-free, my watch is running like a dream on beta 2. I love watchOS 7!!

Says this about EVERY update! Check out past posts. Call ‘em like I see ‘em.
Score: 1 Votes (Like | Disagree)

Says this about EVERY update! Check out past posts. Call ‘em like I see ‘em.

Apple has really been on a roll lately with watchOS. This is the best yet. Checked all of my complications and they are working great!

Thanks!, do you know why is not working for me ? any thought?

If you have enabled and it doesn't work. Submit a bug report to Apple.
Score: 1 Votes (Like | Disagree)

Apple_Robert
When the public beta releases, i may give WatchOS 7 a go, seeing how they will provide a way to roll back, that wont involve everyone having to go to the Apple Store, especially with so many being closed.

Has anyone found any more clues about the "Apple Watch blood oxygen detection feature found in iOS 14 code snippet" that was posted by 9to5Mac back in March?

I haven’t seen anymore talk about it on the internet. I don’t think we will until watch release date gets closer.

sorry, what it’s app name for that ?