iOS 14, iPadOS 14, and macOS Big Sur include some notable privacy updates that offer useful privacy protections for those that invest in and use Apple's range of iPhones, iPads, and Macs. 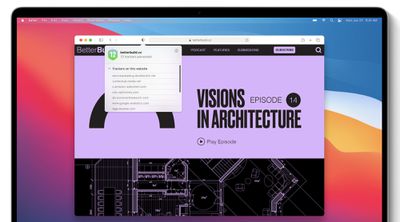 In an interview with Fast Company, Apple software chief Craig Federighi highlighted all of the new privacy features that users can look forward to when the new software updates come out this fall, plus he provided some insight into Apple's privacy philosophy.

According to Federighi, privacy is an important part of every software update because Apple wants to show customers that they can "demand more" and "expect more" from the industry when it comes to privacy protections. "We can help move the industry into building things that better protect privacy," said Federighi.

"I think that there are many instances where we started providing privacy protections of some sort, and then we then saw others in the industry-some of whom have different business models than we do-adopt those practices because users came to expect them," he says. "That's happening all over the place. I mean, look at whether it's apps protecting customer messaging with end-to-end encryption. Or some of the kinds of location protections we're talking about. Or some of our protections, like requiring apps to ask before they access your photo libraries, and so forth. You see those protections being added to other operating systems, inspired by our work and based on the fact that users demand them."

Privacy at Apple is guided by four core principles: data minimization, on-device intelligence, security, and transparency and control. All four of those principles were in play when Apple designed iOS 14, iPadOS 14, and macOS Big Sur, and all of the updates include significant privacy features, as outlined below.

Federighi told Fast Company that many of the new privacy features added to iOS each year are based on customer feedback and emails.

"Now, in many cases, this, in fact, was not happening," says Federighi of concerns over iPhone users being unwittingly recorded. "We know it was not happening. But they believe it is. And so, providing that peace of mind through a recording indicator that will always let you know whether an app, at that moment, is accessing your camera or accessing your microphone is important."

He wrapped up the conversation by saying that he believes Apple's work on privacy protections will be one of the legacies that it's remembered for centuries from now.

Federighi's full interview on privacy can be read over on the Fast Company website, and it's well worth reading because it provides a look at Apple's efforts to improve privacy protections for users over time as well as Apple's thoughts on how developers perceive its privacy features.

Apple_Robert
In my opinion, these upcoming standards should have been standards already. Just the same, I am glad to see Apple looking out for their customers.
Score: 7 Votes (Like | Disagree)

* Clipboard Restrictions - Apps no longer have full access to the clipboard. Previously, most apps could access the last data you copied, but that's no longer the case. Apps will require user permission to access the clipboard for the first time, so you can prevent apps that don't need that information from accessing it.

Yes! I was hoping for this and was worried that since it wasn’t presented, that it wasn’t included. I’m glad to be wrong.
Score: 4 Votes (Like | Disagree)

uniquexoxo
With these in place... sketchy developers would be so pissed ?? I mean you can just tell by knowing which developer removed all social apps log in because they do no want to add SIWA. ?
Score: 3 Votes (Like | Disagree)

Keymaster
Apple's privacy steps are becoming one of the main reasons I stay with them, they really seem to take it seriously, far more than any of the other big companies for sure. And, they are doing things to the detriment of their experience to protect privacy...Siri is an example, where it could work better if they kept more of our information in their system. I suspect they are planning to let computing power take care of that eventually, and building up privacy as their key thing in the meantime. And, it does build trust...I wouldn't trust another cellphone producer with a key to my car for example, but I think Apple will protect one very well.

Are they perfect? Of course not, but each OS release seems to be enhancing privacy instead of sharing our information more. As long as they keep to that philosophy, and stand up to the government when it tries to impinge on our privacy, they will have people who value them.
Score: 3 Votes (Like | Disagree)

Serializing virtually every component on your mother board with T2 which guarantees a 100 percent data loss from any single point failure is a "privacy" fail and a no right to repair victory.

Ya know, I had my iPhone repaired at a third party shop (cracked screen) and what I went through only to receive a subpar quality display (not even OLED on an Xs Max) isn’t worth it. Apple made the devices so they know how to fix them right the first time.
Score: 2 Votes (Like | Disagree)

goobot
The compromised password feature is super cool. I hope it works well.
Score: 1 Votes (Like | Disagree)
Read All Comments