Microsoft today held an event in New York City to show off both new Surface devices and some new dual screen devices that are coming in the future.

MacRumors videographer Dan was in attendance at the event and was able to capture some footage of the newly announced products for an overview that can be watched over on our YouTube channel.

Subscribe to the MacRumors YouTube channel for more videos.
Microsoft's most exciting unveil was the Surface Neo and the Surface Duo, two foldable dual display devices. The Neo is tablet sized while the Duo is phone sized, and both have two displays that aren't connected together into one display but are instead displayed side by side with a hinge. 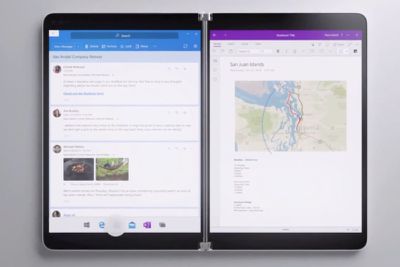 You can hold these devices like a book, using one side for one app and the other side for another app, or you can fold them up into a more traditional form factor. They can also be unfolded into a laptop shape if desired.

The Surface Neo (the larger of the two) has a detachable Bluetooth keyboard and a Wonder Bar that's similar to the Touch Bar on Apple's laptops but larger and with more functionality.

Windows 10X, new custom software based on Windows 10 but designed for dual displays runs on the Neo, while the Duo, which is in fact Microsoft's first smartphone since the Windows Phone in 2017, runs a heavily skinned version of Android.

These two devices were by far the most interesting devices Microsoft had to show off, but unfortunately, they're not launching until the holiday season in 2020 and Microsoft didn't even have prototypes available for attendees to test out.

As for what's available now, Microsoft overhauled its Surface lineup. The new Surface Pro X, designed to compete with the 12.9-inch iPad Pro, features a 13-inch display and it's super slim and light. It has a cover that integrates with a new Surface Slim Pen, and there's an SSD that's user accessible.

The Surface Pro X features an SQ1 processor, LTE connectivity, 13 hours of battery life, and 2 USB-C ports. It's priced starting at $999 and will be available in early November.

Microsoft also unveiled a new version of its Surface Laptop 3, which comes in new colors and finishes, has a larger trackpad, and is equipped with a USB-C port. There's a standard 13-inch model and a new larger 15-inch model that uses AMD Ryzen Surface Edition chips.

Pricing on the Surface Laptop 3 starts at $999 for the 13-inch model and $1199 for the 15-inch model, with Microsoft planning to release both later this month.

Microsoft's final product of note is the new Surface Earbuds, which are wire-free earbuds that are designed to compete with Apple's AirPods. The Surface Earbuds have an unusual look, with an in-ear piece that fits into the ear and a circular disk that's quite large and sits in the outer part of the ear.

The disk supports gestures for controlling playback and live transcription for communicating across multiple languages. Microsoft is charging $249 for its Surface Earbuds, and they'll be available later in the year.

Ma2k5
There will be a lot of haters here naturally, but for years now Microsoft/Google/Huawei events have been far more exciting than Apple events.
Score: 69 Votes (Like | Disagree)

kis
Honestly, looks like bunch of bling to me. It‘s nice to see large manufacturers trying to be innovative - but just throwing new form factors and see what sticks isn‘t my idea of finding to solutions to problems.

And Microsoft knows this: Windows is NOT made to run on tablets. It‘s terribly clunky to use on those.

The Neo and Duo design looks sweet. Reminds me of the Microsoft Courier vaporware/concept video product from a few years ago.

This is getting close. It's going to take a serious product designer to come up with a hinge that practically disappears.

I really like how the Neo keyboard flips up and the bottom screen turns into a beefy touch bar.

Microsoft hit a home run on these products. Let's see if they can follow through with a real product.
Score: 17 Votes (Like | Disagree)
Read All Comments