Apple has registered nine unreleased iPhone models in the Eurasian Economic Commission (EEC) database, according to listings uncovered by MySmartPrice and confirmed by MacRumors. 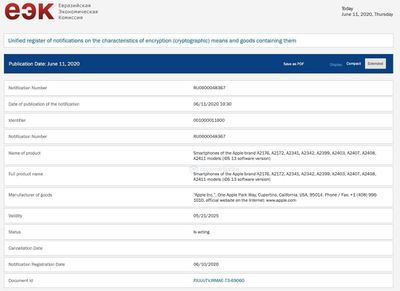 Rumors have suggested Apple will complete its transition to an all-OLED lineup for this year's "iPhone 12," with one new 5.4-inch device, two 6.1-inch models, and one 6.7-inch handset.

Rumors suggest the 6.7-inch ‌‌iPhone‌‌ and one 6.1-inch model will be higher-end OLED devices with triple-lens cameras, while the 5.4 and 6.1-inch models will be lower-end iPhones with dual-lens cameras and a more affordable price tag.

Based on the new model numbers, it's possible that the A2176 and the A2172 refer to the two more affordable models, while the other numbers could be variants of the high-end models. All of the models are listed as running iOS 13. Apple is expected to release new iPhones in the fall.

In addition to the new ‌‌iPhone‌ filings, Apple also registered a previously unseen Mac model with the identifier A2330 and running macOS 10.15 Catalina.

We've been hearing significant rumors about an imminent update to the iMac. Previously reliable leaker CoinX said in March that an ‌‌iMac‌‌ update was coming "soon," while an April rumor claimed a new low-cost 23-inch iMac is coming in the second half of the year.

Mark Gurman said in late April that a "substantial" iMac update with a possible redesign would be coming later in the year, and on Monday, Sonny Dickson claimed that a redesigned iMac with "iPad Pro design language" will be coming at this month's WWDC.

kemal
Just make an iMac that is not held together with tape.
Score: 8 Votes (Like | Disagree)

MrMaxwell
Bring on the 5G iPhones....
Score: 8 Votes (Like | Disagree)

iOS 14 delayed because 13 is already crap?

All of the models are listed as running iOS 13

Yes but you're questioning if iOS 14 could be delayed because iOS 13 is crap - that makes no sense, whatsoever.
Score: 5 Votes (Like | Disagree)
Read All Comments

Friday June 24, 2022 2:52 am PDT by Hartley Charlton
Apple is "likely" to announce its long-rumored mixed-reality headset as soon as January 2023, Apple analyst Ming-Chi Kuo has reiterated. Concept render based on purported leaked information by Ian Zelbo In a detailed post on Medium, Kuo explained that Apple's headset will be a "game-changer" for the augmented-reality and virtual-reality market. Describing some of the headset's...
Read Full Article • 125 comments

Sunday June 26, 2022 7:36 am PDT by Joe Rossignol
iPhone 14 Pro models are widely expected to feature always-on displays that allow users to view glanceable information without having to tap to wake the screen. In the latest edition of his Power On newsletter for Bloomberg, Mark Gurman said the feature will include support for iOS 16's new Lock screen widgets for weather, fitness, and more. "Like the Apple Watch, the iPhone 14 Pro will be...
Read Full Article • 118 comments