New York's Metropolitan Transportation Authority has been working to bring its OMNY contactless fare payment system to all buses and subway stations throughout the city, but the rollout of the system has been delayed due to the ongoing public health crisis, reports The Wall Street Journal. 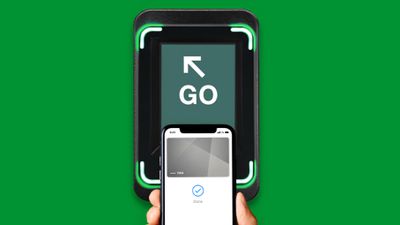 OMNY tap-and-go fare payments with Apple Pay Express Transit support became available at one of New York City's major transportation hubs, Penn Station, back in December 2019, followed by several more stations in early 2020. The rollout was meant to continue on in March and the following months, but installation of digital readers was stopped in late March.

Installation work resumed at the beginning of May, but the completion of OMNY has been delayed by about two months. It was supposed to be finished by October 2020, but now the full system won't be available until the end of December.

While work on OMNY subway support was paused for a couple of months, the bus rollout of the system was accelerated. The MTA now expects to offer contactless payment support on all Manhattan buses by the end of July, and citywide by the end of the year.

At the current time, Staten Island bus stations and about half of the 472 subway stations in New York support ‌Apple Pay‌ through OMNY.

With the OMNY contactless payment system, riders are able to hold an iPhone or Apple Watch near a contactless reader to pay their fare with no authentication necessary, allowing for speedy passage through public transit hubs.

The New York MTA's goal is to bring contactless payment options to all of its subway stations and bus routes. MetroCards, which predate the OMNY system, will continue to work on subway and bus systems until 2023.

Right now, OMNY is limited to full-fare, pay-per-ride usage. Support for 7-day and 30-day fares won't be available until early 2021.

WordsmithMR
I find it remarkable how certain businesses are using the pandemic as to why they are NOT progressing in certain matters. I can't think of a better time for a company to implement this. Devs can easily WFH. Field teams have less to worry about in terms of crowds, meaning easier accessibility to terminals and turnstiles for updates/upgrades (with the exception of the very recent protests, which I am sure they will blame next)

Rolling this out should be an imperative. This will assist in mitigating the public health crisis in NYC. Less touching of high contact surfaces. Unbelievable this is not a priority.

My company took the this time to get a lot of work done that we would not have been able to in such an expedient way. Goes to show that some companies will use any excuse to be lazy, while other companies can assess a situation and turn it into a positive in order to thrive.
Score: 4 Votes (Like | Disagree)

jaffy23
On the lines it was installed before COVID - it worked very well. Also great for splitting payment cards between commuting and business travel.
Score: 3 Votes (Like | Disagree)

ISprainedMyUvula
Predictable. The Apple Pay support for Chicago's Ventra system has been listed as "Coming Soon!" for over a year.
Score: 2 Votes (Like | Disagree)

Wonderboyf1
Ive always wondered why America is slow to adapt to contactless payment, as said above this has been standard in London Underground for years, and contactless payment which is essentially Apple Pay is widely available at retailers across Europe. I haven't used chip and pin for a long time.
Score: 2 Votes (Like | Disagree)

Here up north [in Canada], the ONLY place I have not tapped in the last couple months is Walmart, because they have not enabled for some reason. A couple other big stores that were holding out - Superstore and Home Depot have enabled contactless.

Walmart and some other large U.S. retailers were attempting to create their own version of Apple Pay so they were doing their best to not implement a competitor. Last I heard I believe the whole thing fell apart for them.
Score: 1 Votes (Like | Disagree)

SAIRUS
Did they fix the issue with people accidentally getting charged an entry when they walked close to the scanners?
Score: 1 Votes (Like | Disagree)
Read All Comments