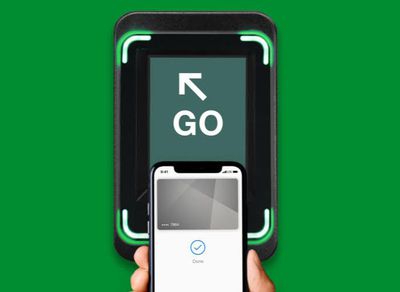 New Yorkers will be able to tap and ride at a total of 85 stations across the MTA system later this month, and the MTA plans to expand contactless payments to all 472 of its subway stations and all of its bus routes by the end of 2020.

Apple Pay will be accepted on MTA-operated buses in Manhattan beginning March 2020, with further plans detailed on the OMNY website.

Apple Pay first became available at select MTA subway stations and on Staten Island buses in May, complete with support for Express Transit mode. Riders can simply hold their iPhone or Apple Watch near the contactless reader to pay their fare, without needing to authenticate with Face ID, Touch ID, or a passcode. The device does not need to be tapped on or unlocked, either.

OMNY is currently limited to full-fare, pay-per-ride use, with additional fare options set to become available during future phases of the rollout, such as unlimited ride passes and reduced fares. Keep in mind that free transfers are only available at OMNY-enabled stations, so plan your trip accordingly.

MetroCards will remain available until at least 2023, according to the MTA.

miguelcoma
Useless until they finally implement unlimited ride plans, which is what most of us commuters have. Hurry up MTA!
Score: 10 Votes (Like | Disagree)

sirgromit
Magstripe-based Metrocards will be replaced by contactless OMNY cards which will be available just as Metrocards are now. You’ll also be able to use your NFC payment devices and contactless credit/debit cards. Far more options than now.
Score: 4 Votes (Like | Disagree)

All part of apples plan to track you

1. OMNY has nothing to do with Apple or Pay. Any transit rider can use their credit card or another tap to pay service (google pay, samsung pay, whatever).
2. Apple doesn’t track what/where/when you pay for something when it comes to Apple Pay. That information is solely between the customer/bank/merchant.
Score: 4 Votes (Like | Disagree)

“MetroCards will remain available until at least 2023, according to the MTA.”

And then what? Only NFC cards and Apple Pay will work? That will leave lots of older tourists stranded...

Yeah, as the comment above me said, the MetroCard will be replaced with a tappable OMNY card in ~2021.

I think cash will also remain an option.

Harlan Erskine
I like the OMNY system but it would be far better to due away with an entrance fee altogether and pay for everything with progressive property, income and tourist taxes. Think of all the money that is wasted on enforcement of the entrance fee that could go to improving service!