Twitter has released an update to its Twitter for Mac app that lets users set timelines to automatically stream new tweets, effectively removing the need to manual refresh. 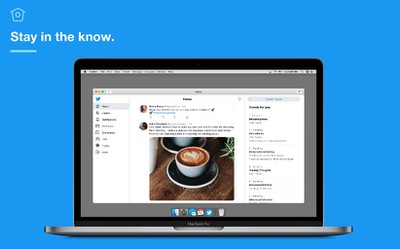 After the v8.17 update has been installed, a new toggle in timeline settings lets users pin their "Latest Tweets" to the top of their timeline, enabling tweets to propagate into the feed in real-time.

Timeline streaming was originally a feature of Tweetbot and Twitterrific until Twitter unceremoniously withdrew the feature for third-party clients with the exception of TweetDeck.

Twitter released its version of Twitter for Mac back in October, when macOS Catalina came out. ‌macOS Catalina‌ was built using Apple's Catalyst feature, which allows iPad apps to be ported over to the Mac.

What’s that new button in your timeline settings ✨ on Twitter for Mac? It’s a “Pin to top” toggle! Turning it on will keep you at the top of your timeline and let the latest Tweets stream in –– no need to manually refresh your timeline. — Twitter Support (@TwitterSupport) April 20, 2020

Twitter discontinued its prior Twitter for Mac client more than a year ago, which wasn't a popular decision with Twitter users. At the time, Twitter said it was ending support for the app to focus on a Twitter experience that was consistent across platforms, and recommended Mac users use Twitter on the web.

Twitter for Mac can be downloaded from the Mac App Store for free. [Direct Link]

With this update I’m still not seeing this option

its a bit hidden under the little 'star' icon see screenshot

Aika
Still a terrible app and another damning indictment of Catalyst.
Score: 2 Votes (Like | Disagree)

martyjmclean
This is a good step! The app still isn't as good as their website or their old app though.
Score: 1 Votes (Like | Disagree)
Read All Comments

Friday July 30, 2021 9:04 am PDT by Sami Fathi
Tesla CEO Elon Musk reportedly once demanded that he be made Apple CEO in a brief discussion of a potential acquisition with Apple's current CEO, Tim Cook. The claim comes in a new book titled "Power Play: Tesla, Elon Musk and the Bet of the Century," as reviewed by The Los Angeles Times. According to the book, during a 2016 phone call between Musk and Cook that touched on the possibility of ...
Read Full Article • 181 comments