An Apple employee who works at Apple's Culver City campus, where its Apple TV+ and Apple Music efforts are headquartered, has tested positive for coronavirus, reports Billboard. 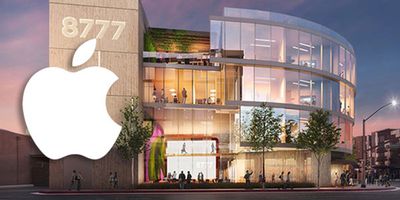 Employees at the Culver City office were notified about the infection on Saturday, but as of today, the campus remains open.

Apple has asked all of its employees with positions that allow them to work from home to do so in an effort to cut down on the spread of the coronavirus, but there are some employees who are not able to work remotely.

A recent report suggested that Apple's guidelines around product secrecy have made it difficult for some software developers working on sensitive products to bring their work home, as they are prevented from accessing important internal systems outside of Apple's campus.

This has led to many engineers continuing their work at Apple's campuses, and there are likely other employees in similar situations at other Apple campuses and offices worldwide, such as the Culver City location.

Culver City is known as a headquarters for movie and television production, and many major studios are located in the area. Apple's video content team works out of its Culver City offices, as does its ‌Apple Music‌ team.

Last week, an Apple employee who worked at a Santa Monica Apple Store contracted coronavirus, and Apple has since shut down all of its retail locations for the next two weeks.

News today also suggests that Apple CEO Tim Cook and iTunes chief Eddy Cue may have been exposed to coronavirus as Universal Music Group CEO Lucian Grainge has been hospitalized after falling ill with the infection. Cook and Cue attended a birthday party for Grainge on February 29, but it's not clear if Grainge had the coronavirus at that time.

Since the virus takes two to 14 days on average to infect after exposure, Cook and Cue are likely safe if no symptoms have appeared at this point, though there are reports of a few outlying incubation times that exceed two weeks.

justperry
Most people will get coronavirus, just a matter of time, I understand the importance of reporting this but eventually there will be lots of them, reporting on each of them will be too much by then.
Score: 17 Votes (Like | Disagree)

50 million have gotten the seasonal flu so far as well...... are we going to report each one of those?

Wonder how many thousands of apple employees have called in sick in the last 6 months...:rolleyes:

When people keep bringing the seasonal flu to the conversation shows the level of ignorance we face.
Score: 12 Votes (Like | Disagree)

Funny if we treated all sorts of things like homicides or gun violence like the coronavirus there would be even more pandemonium.....except we have.....and there isn't.....but a flu comes along that kills a few extra old people and THE WORLD IS ENDING WE ARE ALL GONNNA DIEEEEEEEEE!

Cant wait to see all the survival numbers come out to show just how massively obnoxiously overblown this all has been.

Im not advocating people do whatever they want. Everyone needs to be diligent as the SHOULD BE DURING EVERY FLU SEASON.

But it takes nearly a government lockdown for people to learn what they should have been taught as 4 years olds....wash your hands and cover your mouth and stay home when sick.

People who have plenty of sick time still come to work so that they "dont get too far behind" and then end up infecting half the office which puts EVERYONE behind.

Thoughts like this are literally going to be responsible for more deaths. You have blood on your hands.
>2% death rate and a 14 day incubation period where you show no symptoms but you can spread it is extremely dangerous and nothing like the seasonal flu.
We need to slow down the spread so our hospitals have enough beds and respirators for the people with serious symptoms.
Score: 5 Votes (Like | Disagree)

Almost all the deaths have been older people with existing conditions (i.e. if you are < 70 without medical issues, the death rate is very low).

Also, I surmise that the number of cases is much higher then what is reported. Some people show no symptoms or very minor symptoms (i.e. they are not identified). This would make the death rate even much lower than the 1.7% you posted.
Score: 4 Votes (Like | Disagree)

jntdroid
The problem with all of the panic has nothing to do with who is or isn't getting sick. The problem is the economic impact. Small businesses will go under because of this. Some large businesses will end up filing bankruptcy or making huge cuts (i.e. firing people) to stay afloat. If anybody was close to retiring and totally dependent on their 401k, if they weren't properly diversified they've just lost 20-30% of their retirement fund in a matter of weeks.

Funny if we treated all sorts of things like homicides or gun violence like the coronavirus there would be even more pandemonium.....except we have.....and there isn't.....but a flu comes along that kills a few extra old people and THE WORLD IS ENDING WE ARE ALL GONNNA DIEEEEEEEEE!

Cant wait to see all the survival numbers come out to show just how massively obnoxiously overblown this all has been.

Im not advocating people do whatever they want. Everyone needs to be diligent as the SHOULD BE DURING EVERY FLU SEASON.

But it takes nearly a government lockdown for people to learn what they should have been taught as 4 years olds....wash your hands and cover your mouth and stay home when sick.

People who have plenty of sick time still come to work so that they "dont get too far behind" and then end up infecting half the office which puts EVERYONE behind.

I could not have said it any better mate. Look, this is serious but so is the Flu. However, the real danger Covid 19 is potentially creating, is a Global Depression. Gov'ts around the world are shutting down their economies. Businesses need to make money to stay in business and workers need to make money to pay their bills or they could find themselves out on the street and their vehicles repossessed. Because of the fear and hysteria people are buying 6-8 month supply of toilet paper, buying up all the bread, water, tinned and dry food. It's so bad at Walmart that Supercenters in my area are now closing at 11pm and reopening at 6am because they "can't" stock the selves with all the "Panic Buying".
Score: 3 Votes (Like | Disagree)
Read All Comments