For some time now, rumors have suggested Apple will add a laser-powered time-of-flight (ToF) 3D rear camera to its iPhone 12 series, which will bring significant improvements in the form of new augmented reality experiences and better photos. 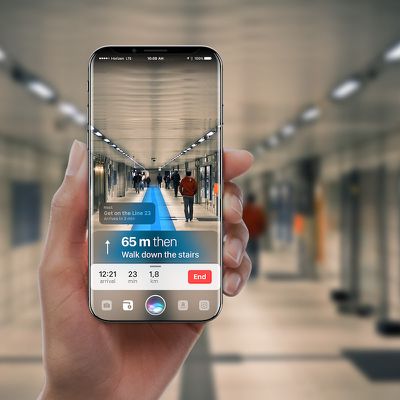 A report on Wednesday by Fast Company adds to those rumors, citing sources familiar with Apple's plans. According to the report, Apple has tapped San Jose-based Lumentum to supply the VCSEL lasers that will power the "world-facing" 3D depth sensor in "at least one of this year’s iPhones."

VCSELs, or vertical-cavity surface-emitting lasers, have been a key component of Apple's TrueDepth camera since the iPhone X in 2017. The lasers power several flagship features like Face ID, Animoji and Portrait mode selfies, as well as the proximity-sensing capabilities of AirPods. However, a ToF camera system is a major step up from TrueDepth due to its more advanced use of laser.

TrueDepth relies on a structured-light technique that projects a pattern of 30,000 laser dots onto a user's face and measures the distortion to generate an accurate 3D image for authentication. By contrast, ToF calculates the time it takes for a laser to bounce off surrounding objects to create a 3D image of the environment. This allows for more accurate depth perception and better placement of virtual objects, and should also result in photos better able to capture depth.

Apple has sourced VCSELs for its TrueDepth cameras from Lumentum before, but the California-based firm has typically shared the spoils of Apple's business with other suppliers in previous years, and Fast Company's source appears to be suggesting they will be Apple's exclusive VCSEL supplier this time around. Lumentum is believed to have been ramping up additional manufacturing capacity for VCSELs and edge-emitting lasers since at least March 2018.

Multiple sources have claimed that Apple's 2020 iPhones will include a laser-powered time-of-flight 3D rear camera that will result in significant improvements to AR experiences, including Bloomberg's Mark Gurman and Apple analyst Ming-Chi Kuo.

Those rumors indicated that two higher-end iPhones coming this year will use the new time-of-flight rear camera, indicating that it may not be available in the lower-end iPhones that are going to have a lower price tag.

Rumors suggest a 6.7-inch ‌iPhone‌ and one 6.1-inch model will be higher-end OLED devices with triple-lens cameras, while the 5.4 and 6.1-inch models will be lower-end iPhones with dual-lens cameras and a more affordable price tag. All iPhones in 2020 are expected to feature OLED displays regardless of price.

In related developments, a report earlier this week claimed that Apple is planning to introduce a new augmented reality app in iOS 14, which is codenamed Gobi. The app is said to allow users to "get more information about the world around them" through AR.

The app may feature integrations with Apple Stores and Starbucks, which suggests users could do something like hold up an ‌iPhone‌ in an Apple Store to view information about products.

calstanford
That'll be a nice gimmick to play with and show off to your friends.

Noone holds their phones this way when navigating around.
Score: 8 Votes (Like | Disagree)

That'll be a nice gimmick to play with and show off to your friends.

Noone holds their phones this way when navigating around.

You don't have to hold it that way the whole time. The example they are giving is with directions. Even when using Maps for walking directions today, I look at the phone to see where I'm going and then hold it normally.

But you have to start somewhere. This tech will obviously eventually be built in as option for glasses (or some other forward facing sensor) that can wirelessly connect to your phone to give you prompts or let you see the info without walking around with your phone raised.

I'd be okay with raising my phone at a monument, building, whatever and having it be scanned and then giving me info about what I'm looking at. More than a nice gimmick IMHO.
Score: 4 Votes (Like | Disagree)

That'll be a nice gimmick to play with and show off to your friends.

Noone holds their phones this way when navigating around.

What about geocaching ('https://www.geocaching.com/play')? All revolutionary technologies are introduced before the ecosystem is ready.
Score: 3 Votes (Like | Disagree)

I like that concept phone in that rendered image.. Would buy that any day over my 11 pro max..
After having a look at how thin bezels do S20 series have, I phones so called all screen phones have started looking dated..
It's been same design for last 3 years..

It may look dated, but trust me, you don't want to trade the Face ID on iPhone for the in display fps on the Samsung S series that is currently out. I have an 11 Pro and an S20. I really enjoy both phones very much but that fps is often pokey and fails a lot. Even Android friendly reviewers complain about it.

What I hope is that side button scanners get improved and implemented, at least on future Samsungs.
Score: 2 Votes (Like | Disagree)

That would be really asinine if Apple makes their most expensive iPhone 12 model notchless while cheaper models retain the notch.

The notch design is without a doubt the most disgusting product ever produced by Apple.
Score: 2 Votes (Like | Disagree)
Read All Comments