Apple appears to be working on full Project Catalyst versions of Messages and Shortcuts for Mac, according to hints of the new apps found by developer Steve Troughton-Smith. 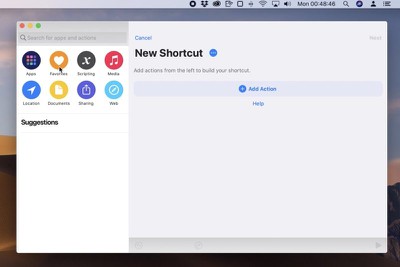 Much of the UIKit Messages app is functional on macOS, using the native Catalyst UI from the ‌macOS Catalina‌ system frameworks. iMessage Effects, for example, are functional.

And, just for reference: this isn't a 'marzipanified' version of the Messages app from the iOS Simulator. This is the 'native' Catalyst UI coming from the macOS 10.15 system frameworks. Just like Shortcuts, it's all there, and mostly works if you know how to talk to it pic.twitter.com/VO59kPbbVY — Steve Troughton-Smith (@stroughtonsmith) June 19, 2019

Apple made no mention of an overhauled Messages app or bringing Shortcuts to Mac when introducing ‌macOS Catalina‌, so these features could be reserved for a future Catalina release that's perhaps coming later in the year.
Related Roundup: macOS Catalina
Tag: Project Catalyst
[ 86 comments ]

Project Marzipan is just a glorified Electron framework. I refuse to run such garbage apps as Electron ones as I would rather run flash apps. Native apps only, Apple, or you'll set a terrible precedent here.

Rather run flash apps? What year are we in? Wha?!

If Catalyst works well and there are no major problems, what's the big deal? Suddenly the Mac is filled with apps and developers, paving the way (hopefully) toward ARM Macs.
Score: 18 Votes (Like | Disagree)

ThisBougieLife
This is all very good. For a while I've felt that iOS gets all the attention and macOS and its apps sometimes feel neglected or feel like afterthoughts. This is going to change that.
Score: 12 Votes (Like | Disagree)

Project Marzipan is just a glorified Electron framework. I refuse to run such garbage apps as Electron ones as I would rather run flash apps. Native apps only, Apple, or you'll set a terrible precedent here.

Electron is basically a chrome-less Chromium browser rendering a web app inside. Project Catalyst is rendering natively on macOS but using the UIKit API rather than AppKit API. Both UI kits are using Cocoa underneath the surface AFAIK. Sure, the current design of Catalyst/Marzipan apps is garbage, but it is native and has absolutely nothing to do with Electron. Finally, how is Flash relevant at all in this conversation?
Score: 11 Votes (Like | Disagree)

Bearxor
The real goodness is in one of his recent blog posts...

> you can statically translate binaries between Intel and ARM if they include Bitcode. It really works!

> Apple could use Bitcode to translate every Bitcode-enabled app on the Mac App Store, without consulting developers, so it would be ready to go on day one. This kind of power means Apple needn’t preannounce an ARM switch a year ahead of time, and also means a technology like Rosetta may be completely unnecessary this time round.
Score: 7 Votes (Like | Disagree)

cardfan
Doesn’t sound promising in that these will be limited iOS like apps.
Score: 6 Votes (Like | Disagree)

dogslobber
Project Marzipan is just a glorified Electron framework. I refuse to run such garbage apps as Electron ones as I would rather run flash apps. Native apps only, Apple, or you'll set a terrible precedent here.
Score: 5 Votes (Like | Disagree)
Read All Comments

Saturday July 11, 2020 1:42 pm PDT by Arnold Kim
Casual MacRumors visitors may not realize that we have a very active PowerPC forum where users discuss issues related to PowerPC Macs that have not been produced since 2006. Threads range from hardware upgrades and software options to nostalgia: Photo by AphoticD Apple's recently announced transition to Apple Silicon (Arm) based Macs raised some interesting questions about future support...
Read Full Article • 101 comments

Friday July 10, 2020 3:33 am PDT by Tim Hardwick
Apple TV+ today debuted "Greyhound," the highly anticipated Second World War movie starring Tom Hanks as a naval officer given command of Navy destroyer Greyhound in the Battle of the Atlantic. "Greyhound" features Hanks as George Krause, who must fight his own self doubts and personal demons as he leads a convoy of Allied ships against German U-boats to prove that he belongs in command. ...
Read Full Article • 66 comments