Apple is working on updated 11 and 12.9-inch iPad Pro models that are set to be released in the first half of 2020, perhaps as soon as March if rumors of a March 31 event are accurate.

Subscribe to the MacRumors YouTube channel for more videos.
Prior to the release of new devices, case makers often scramble to be the first to have cases ready, and there are already ‌iPad Pro‌ cases designed for new models available from Amazon. We picked up a couple of the cases and thought we'd check them out to see what they reveal about the upcoming ‌iPad Pro‌ refresh. 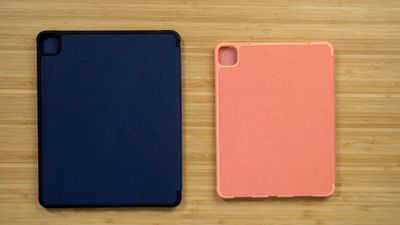 The cases are from Amazon seller Dux Ducis, with options available for both the 11-inch iPad Pro and the 12.9-inch iPad Pro, both of which are expected to be refreshed this year.

Size wise, these cases fit the current 11 and 12.9-inch ‌iPad Pro‌ models, because we're not expecting any changes to the general design of the ‌iPad Pro‌. Dimensions and thickness are expected to remain the same with the new models.

Most people aren't using their iPads for serious photography so we have seen questions about why a tablet would need a triple-lens camera system, but rumors suggest this is a 3D time-of-flight camera system that uses a laser to capture depth information about the world around you.

A time-of-flight camera system measures the time it takes for a laser to get from the camera to the subject in each point of an image, creating a 3D map of the surrounding area. This has interesting implications for augmented reality capabilities, and in a past note, Apple analyst Ming-Chi Kuo suggested the ‌iPad Pro‌ would be able to capture 3D models that could then be edited with the Apple Pencil for an "all-new productivity experience."

This technology is also expected to be introduced in the 2020 iPhones, and it's interesting that rumors indicate new camera functionality is coming to the iPad ahead of when it comes to the ‌iPhone‌.

Aside from the square-shaped camera cutout, the ‌iPad Pro‌ cases are pretty much identical to cases you can get for current ‌iPad Pro‌ models. A dummy model of the new ‌iPad Pro‌ that we got last year does fit into the new case perfectly.

Along with these cases from Amazon, major manufacturers like Pad & Quill have also started offering cases for the 2020 ‌iPad Pro‌ models, which is a hint that a device launch is likely coming quite soon.

Other than the new camera system, updated ‌iPad Pro‌ models are also expected to feature upgraded processors, and later this year, additional high-end models could come out with features like a mini-LED display and 5G connectivity.

Current rumors suggest that Apple is planning to hold an event on March 31, but it is unclear if coronavirus concerns might impact Apple's plans as there are rumors of production delays and potential issues with large gatherings as many companies have been canceling events in recent weeks.

ooans
I can't wait until the whole back side of the iPad is covered in cameras.
Score: 5 Votes (Like | Disagree)

Cameras do not have 12" displays for a reason.

Agreed, but I’ve never seen people using an iPad as in your example. But I’ve seen a lot of teachers/instructors/videographers using iPads to record entertaining/instructional videos. Having the best available cameras work great for that type of setup.

Anyways, I could see Apple working it’s way with the tri-lens camera for the iPad. It’s a marketing point and sometimes I think the iPad camera is a bit ‘forgotten’, this easily is a way to make it renowned. It definitely would have its use cases.

This is MacRUMORS... It’s not odd at all that they would do a hands on with a rumored case design Of a rumored iPad redesign.
Score: 4 Votes (Like | Disagree)

I've always wanted from day 1 for the iPad should have a great camera.
It always used to upset me that for many years Apple did not treat a iPad camera as anything important.

What frustrated me also was the very very many people on these forums who always used to insist the iPad's should either not have a camera at all, or only have a very basic one.

Cameras do not have 12" displays for a reason.
Score: 2 Votes (Like | Disagree)

I consider myself a super-user. I travel the world with my iPad Pro, use it constantly for work and pleasure, surfing, reading, editing Office files, taking notes, annotating PDFs, editing photos using Lightroom and Photoshop, watching movies while connected to hotel TVs, and occasionally scanning documents or taking images of whiteboards.

For me, as much as I rely on this platform, a single, moderate resolution camera is all I will ever need. This new, rumored camera functionality -- while useful for a tiny group perhaps -- is useless to most iPad users. Worse, it adds unnecessary cost to an-already costly unit. I would very much like to see an iPad Pro model without the upgraded camera for a lower cost. To me, I can't believe that any of Apple's market research points to any clamor for this tech on this particular piece of equipment.
Score: 1 Votes (Like | Disagree)

Yoms
Trackpad = better pointer design in the next iPadOS. I'll take it. But the dream would be an iPad Pro able to run macOS and, by the flip of a button, switch back to iPadOS.

At my desk, I would have a iPad Pro + Magic Keyboard + Magic Mouse + external display = full macOS experience
Everywhere else, I would have the iPad Pro alone enjoying an iOS-style experience. On the go, you can't beat the 468/631 grams even with a new 12" ARM MacBook.
Score: 1 Votes (Like | Disagree)

currentinterest
It is interesting and a bit confusing that it is implied that there may be two updates in 2020. The first likely featuring the new camera system, and one would presume an A13X processor, and the second a mini-LED display, 5G, and possibly an A14X. Something seems odd about this, time will tell I presume.
Score: 1 Votes (Like | Disagree)
Read All Comments