Apple regularly adds new games to Apple Arcade, and this week's addition is Crossy Road Castle, made by Hipster Whale, the developer behind the popular Crossy Road game.


Crossy Road is an endless Frogger-style game where the goal is to get various animals and characters across the road, but Crossy Road Castle, which was announced back in October, is a cross between an endless runner and a platformer.

Crossy Road Castle uses a similar art style as Crossy Road, with players guiding characters through a castle that's rife with enemies and obstacles to overcome. The goal of the game is to climb as high into the castle as possible. 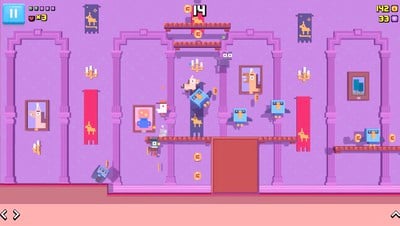 As with Crossy Road, gameplay will unlock new characters to play. Hipster Whale says that new towers and characters will be introduced regularly.

cmaier
Those graphics look like someone puked up grape juice. I can’t even tell what’s going on.
Score: 14 Votes (Like | Disagree)

HiVolt
I really don't understand what the point is of pixelizing modern games. It adds NOTHING to the gameplay, in fact it makes it hard to see what's what.

There's a reason why hardware has advanced to the point that you don't have to make things pixelated on purpose.
Score: 7 Votes (Like | Disagree)

apparatchik
This is exactly what so many have been asking from the service, a high quality, hardcore, triple A title. Finally.
Score: 5 Votes (Like | Disagree)

coolfactor
With some of the sounds reminiscent of Super Mario Brothers. :p

Those graphics look like someone puked up grape juice. I can’t even tell what’s going on.

You're looking at a single screen grab of one level. Motion adds a whole new dimension, so your concerns are not that valid. Maybe try the game and then let us know what you think?
Score: 4 Votes (Like | Disagree)

simonmet
Watching that for 5 seconds was too much.
Score: 4 Votes (Like | Disagree)

With some of the sounds reminiscent of Super Mario Brothers. :p

You're looking at a single screen grab of one level. Motion adds a whole new dimension, so your concerns are not that valid. Maybe try the game and then let us know what you think?

Yeah, the graphics make it very hard to see what’s going on. I did try it.

Thursday July 22, 2021 3:22 pm PDT by Juli Clover
iDOS 2, an app designed to allow users to play classic DOS games, will soon be pulled from the App Store, the app's creator said today. According to iDOS developer Chaoji Li, he tried to submit an iDOS update with bug fixes to the App Store, but was told that the update was rejected because it violated the 2.5.2 App Store guideline that says apps cannot install or launch executable code.Durin...
Read Full Article • 224 comments