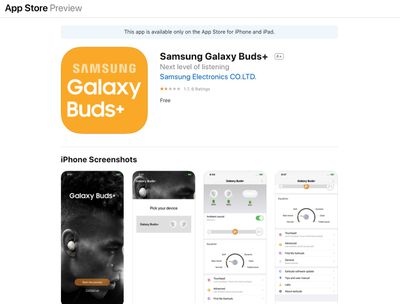 Confirmation came via an App Store preview of the wireless earphones' iOS app, first spotted by CNET, indicating that the Galaxy Buds+ will be officially compatible with iPhone 7 and newer devices running iOS 10 or higher.

Other than that, the app description reveals little else about Samsung's new earbuds. However, serial gadget leaker Evan Blass has subsequently shared an official-looking spec sheet of the upcoming Galaxy Buds+ compared to the current Galaxy Buds.

Image via @evleaks
Unlike Apple's ‌AirPods Pro‌, the Galaxy Buds+ don't have active noise cancellation, but the design remains the same as the current Galaxy Buds, so there is some passive sound isolation. Otherwise, the new earbuds have upgraded speakers and an additional microphone, so expect improved audio.

The Galaxy Buds+ will cost $149, up from $129, and will be available in black, white, red, and blue colors. Speculation suggests that Samsung may also include the earbuds in the box with the upcoming Galaxy S20, but this hasn't been confirmed.

After CNET highlighted the existence of Apple's App Store preview, a Samsung spokesperson told the website that the company is "excited to introduce Galaxy Buds+ soon." Samsung noted that its app "will allow iOS users to enjoy an optimized sound experience, on the go."

Samsung will hold its Unpacked event on February 11 in San Francisco, where it's expected to introduce its latest flagship smartphone, the Galaxy S20, along with a new folding phone called the Galaxy Z Flip.

Subscribe to the MacRumors YouTube channel for more videos.
Apple has reportedly been experiencing "much higher" than expected demand for its $249 ‌AirPods Pro‌, and the company is said to have ask its supplier Luxshare Precision to double production of the high-end earphones to two million units per month.

Together with the Apple Watch, the AirPods and ‌AirPods Pro‌ have been a driving force behind growth in Apple's wearables category, which recently set new fourth quarter revenue records worldwide.

I don't get why you'd get Galaxy Buds or AirPods and get the opposing smartphone for it. I mean, it doesn't make a huge difference, but a consistent eco-system is better than a fractured one.

You have been trained by apple not to understand the freedom of using a headphone on w/e device you want because at the end of the day it's just a headphone. Only apple makes it difficult to play nice with others.
Score: 24 Votes (Like | Disagree)

Puppuccino
I don't get why you'd get Galaxy Buds or AirPods and get the opposing smartphone for it. I mean, it doesn't make a huge difference, but a consistent eco-system is better than a fractured one.
Score: 12 Votes (Like | Disagree)

Exactly, I say use what works best for you, not what you are "forced" t use.

I could care less about the brand, as long as the price/performance is good for my needs.

Was a Diehard fan myself, but never really understood the "superior integration", it's a pair of headphones....they work, they show the battery on the phone and they control music, just like any other Bluetooth headphones. The fact that they only show battery on iPhone and not on other phones is a limit of Apple, not Android (and 3rd party software proves that :D ).

Have you ever used Airpods? If you have (pretty much doubt you have) then you would know that it is not just about the battery, which is the least I care since mine last for nearly a week with a single charge and looking at the battery is not something I generally do.
And lol at you calling yourself an ex "Diehard fan" ????

By the way I couldn't help but notice this comment from you "Exactly, I say use what works best for you, not what you are "forced" t use"

What on earth makes you guys think people are forced to buy or use things they don't want? What century do you think this is? What kind of person do you think get forced to spend their hard-earned cash on things they do not want and not work best for them? Seriously, what kind of rubbish mentality is the one that when people buy the stuff you don't like, they are "being forced" to buy them, but when they buy stuff that you like, they have chosen the free choice? Are you mad enough to think I would spend hundreds of £ on stuff that I don't like? Get over it and let people buy/use what they like without judging them.
Score: 8 Votes (Like | Disagree)

I don't get why you'd get Galaxy Buds or AirPods and get the opposing smartphone for it. I mean, it doesn't make a huge difference, but a consistent eco-system is better than a fractured one.

Android and eco-system shouldn’t be used in the same sentence
Score: 6 Votes (Like | Disagree)

You have been trained by apple not to understand the freedom of using a headphone on w/e device you want because at the end of the day it's just a headphone. Only apple makes it difficult to play nice with others.

You have been trained by apple not to understand the freedom of using a headphone on w/e device you want because at the end of the day it's just a headphone. Only apple makes it difficult to play nice with others.

I would get AirPods over these any time just for the simple integration across devices. If your idea of playing nice with others is having to download a dedicated app to make it work (another app on my device) I don't want it. They would still not be able to match the experience of the hardware/software integration.

Nicely said! Apple fans isolate themselves and are very paranoidal about non-Apple devices

I have almost every year switched outside the Apple ecosystem, to realize why people are so attached to Apple's products. So please let me worry about the "isolation"
Score: 4 Votes (Like | Disagree)
Read All Comments