Apple Matched or Surpassed Samsung for Smartphone Shipments in Q4 2019

Apple matched or overtook Samsung to become the world's biggest smartphone maker in the fourth quarter of 2019, according to new data from market tracking firms.

A new report by Strategy Analytics put Apple's iPhone shipments for the fourth quarter of last year at 70.7 million units, slightly ahead of Samsung's estimated 68.8 million. 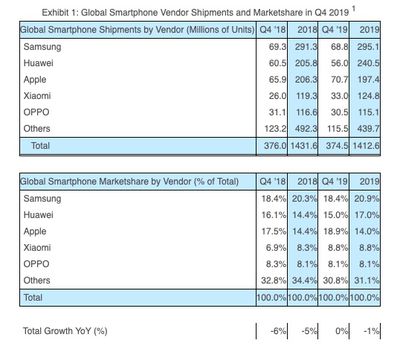 "Apple iPhone shipments rose 7 percent annually from 65.9 million units worldwide in Q4 2018 to 70.7 million in Q4 2019. This was Apple's best growth performance since 2015. Apple's global smartphone marketshare has lifted from 18 percent to 19 percent in the past year. Apple is recovering, due to cheaper iPhone 11 pricing and healthier demand in Asia and North America."

Research firms are forced to estimate global smartphone sales because Apple stopped providing its own ‌iPhone‌ figures in January 2019, while Samsung gives a total number that includes smartphones and feature phones.

As a result, there are inconsistencies between market researchers' data. For example, IHS Markit have the positions of the two biggest players flipped, with Samsung at 70.7 million and Apple at 67.7 million. As Bloomberg notes, the consensus is that there's essentially no longer any daylight between the two dominant brands in mobile phones.

Apple's approximate tie with Samsung is due to a recent surge in ‌iPhone‌ sales, which brought in $56 billion in revenue for 8 percent growth during the December quarter, according to the company's latest financial results.

The ‌‌iPhone‌ 11‌ was the top-selling ‌‌iPhone‌‌ every week during the quarter, and the three new ‌‌iPhone‌‌ models were Apple's most popular iPhones. The company reported $22.2 billion in profit on $91.8 billion revenue, making the last quarter the best in Apple's history in terms of revenue and profit, topping the first fiscal quarter of 2018.

Meanwhile, Samsung this week reported a 38 percent decline in profit. The Korean company saw a boost in its mobile business, but it wasn't enough to offset declines in its component operations, mainly due to falling memory chip prices.

According to Strategy Analytics, so did Huawei – the Chinese manufacturer reportedly shipped around 240 million phones, allowing it to overtake Apple and become the world's second best-selling smartphone manufacturer in 2019.

Pretty incredible. Sell the same amount of phones for $71B more in revenue. Samsung needs to rethink their strategy, but I am not sure where they go. Focus on the low end and revenue dips even further, focus on the high end and Apple is your main competition. It's a lose lose.

It’s ironic really. Many years ago, people claimed that the iphone would be commoditised by cheaper android phones. Turns out it’s Samsung being sandwiched between Apple at the high end and cheaper Chinese OEMs at the low end.

I don’t see a way out for them. Samsung lacks a cohesive software and service portfolio to adequately differentiate their product offerings and pumping hardware specs only gets you so far.

Samsung is better off selling smartphone components to Apple than trying to compete with them head on.
Score: 9 Votes (Like | Disagree)

DNichter
Pretty incredible. Sell the same amount of phones for $71B more in revenue. Samsung needs to rethink their strategy, but I am not sure where they go. Focus on the low end and revenue dips even further, focus on the high end and Apple is your main competition. It's a lose lose.
Score: 8 Votes (Like | Disagree)

Samsung better hope Apple never go after to budget end of the market since it seems to make most of it's volume sales there. (the A30 is a pretty nice non-phone you can put a big SD card in and use for media consumption and wifi browsing instead of phone calls)

Perhaps Samsung should have a Fire Sale... oh they tried once before...
Score: 8 Votes (Like | Disagree)

I7guy
Comparing the estimated mobile phone revenues from both companies tells the story of why market share is absolutely irrelevant, except for some minor talking points.
Score: 6 Votes (Like | Disagree)

Samsung better hope Apple never go after to budget end of the market since it seems to make most of it's volume sales there. (the A30 is a pretty nice non-phone you can put a big SD card in and use for media consumption and wifi browsing instead of phone calls)

Perhaps Samsung should have a Fire Sale... oh they tried once before...

I really feel like this rumored "SE2" is going to crush it. A $399 iPhone with updated internals is way more important today than when the original SE was released.
Score: 5 Votes (Like | Disagree)
Read All Comments