Back in 2015, Tim Cook threw his weight behind a water-efficient shower head called Nebia, which sprays in a way that uses less water, but still keeps people warm. It doesn't have an Apple logo on it, but looks like something the company would design – if it made bathroom hardware. 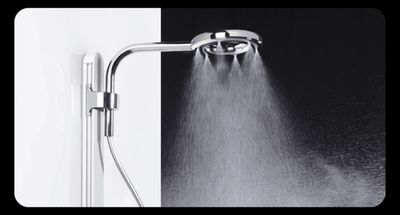 Today, Nebia unveiled a new version of its shower system, and some of the interesting backstory behind Cook's arguably left-field investment choice has also come to light.

According to Bloomberg's Mark Gurman, the Apple chief reportedly made his decision off the back of first-hand experience with the product, after he serendipitously stepped under a prototype at his local gym in Palo Alto, California.

Philip Winter, who helped create the Nebia, told Gurman he managed to persuade fitness centers in Silicon Valley to run pilot tests of the eco-shower, and after installing the prototypes he would wait outside locker rooms to get feedback. That's when he met Cook.

Cook was drawn to the environmental aspect, according to Winter, who asked the Apple boss if he'd be willing to make an investment. Despite the first prototype being "crude," the Apple CEO was excited about the product because there hadn’t been much recent innovation in the shower market. He also appreciated the design, Winter said.

Cook subsequently backed Nebia and also went on to contribute in later financing rounds. The startup has raised almost $8 million in total, according to Crunchbase.

Winter said Cook had invested a "significant" amount of his own money in the eco-shower head and advised Nebia on suppliers. He also pushed the startup to prioritize user experience, design and sustainability. According to Winter, Cook's input came in a series of emails that were "very long, well crafted and detailed."

The new Nebia, launching today on Kickstarter, is a smaller and less expensive version of the one Cook originally tested first-hand, but it's the result of a two-year partnership with faucet maker Moen that the Apple boss supported. The Nebia by Moen starts at $160 on Kickstarter, and will eventually be available for $199, down from $499.

rjtyork
Gotta admit there’s some balls involved in waiting for people outside the shower to ask if they enjoyed it. Especially with someone like Tim Cook.
Score: 11 Votes (Like | Disagree)

H.E. Pennypacker
Moen needs to launch a Kickstarter for a new product? They don’t have enough capital to launch this on their own?
Score: 6 Votes (Like | Disagree)

That's certainly progress and I don't want to be too negative - but the next step is to get it down to $50 or so, so that it gets fitted to 90% of showers rather than just (being optimistic) 10% of hipster wet-rooms.

(I'm sure that you can pay way more than $200 for a fancy shower head that doesn't save water, but they're going to be outsold 10:1 by cheaper ones).

Innovation is good, but if you claim to be saving the planet then it needs to be driven by sensible priorities: a cheap shower head that saves 10% of the water and could be simply screwed on to your existing hose would likely be better for the environment than an expensive one that saves 50%.

NB: a $200 shower-head might pay for itself in water bills (at least in the Californias of this world) but it is important to remember that the "total cost of ownership" concept is a luxury only enjoyed by those with plenty of capital. (Documented by Terry Pratchett as the "Sam Vimes 'Boots' theory of socioeconomic unfairness" - google it)
Score: 6 Votes (Like | Disagree)

budselectjr
Since I don't live in a state where I will get fined or go to jail for using too much water I will stick to my normal shower heads with the flow reducer removed.
Score: 4 Votes (Like | Disagree)

gixxerfool
I don’t like Kickstarter as it is, too much room for them to take your money and run. I’m tired of established companies using crowdfunding for their prototyped ideas.
Score: 3 Votes (Like | Disagree)

D.T.
I love a good shower, I mean, a well designed one, with good water delivery/pressure, the right kind of lighting (warm, dimmable), space, open shelfs for a beverage (shower cocktails, woo!). A couple of hotels we've been to, I'm like, "I am moving into this shower, they'll have to drag me out ..."

Gotta admit there’s some balls involved in waiting for people outside the shower to ask if they enjoyed it.