With 2019 coming to a close and the new year beginning, it's a great opportunity to step back for a minute to look back at the biggest news from last year (or even the last decade) and get a big picture of what we might see in 2020.

But taking in the big picture doesn't mean that the rumors stop, and recent days have seen a flurry of rumors about Apple's potential plans for new low-cost "iPhone SE 2" models, updated iPad Pro models, a (PRODUCT)RED Apple Watch, and even a high-end Mac targeted at the esports market.

What to Expect From Apple in 2020: New iPhones, Refreshed iPads, Apple Watch Series 6 and More

Happy New Year! 2020 is upon us, marking the start of a new decade. Rumors suggest Apple has a lot in the pipeline this year, including new low-cost iPhone models, iPad Pro models with triple-lens rear cameras, Apple Watch Series 6 models, and possibly even a gaming-focused Mac, and make sure you let us know what you'd like to see this year! 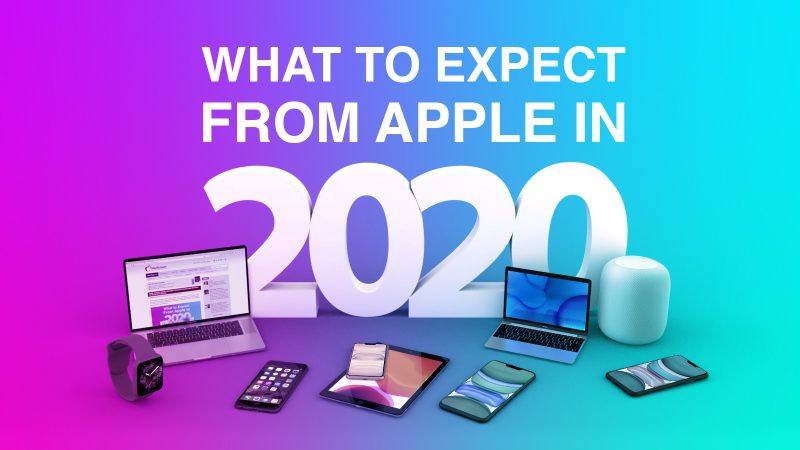 With 2019 in the rearview mirror, we decided to look back at everything Apple released during 2019 and put together a list of 10 of our favorite Mac, iPhone, and iPad apps of the year. We have also rounded up a list of the best Apple products released in the past decade as picked by MacRumors readers.

Apple plans to release as many as six new iPhone models in 2020, including four with OLED displays and two with LCD displays, according to hit-or-miss supply chain publication DigiTimes.

The report said one of the iPhones may be an LCD-based 5.5-inch or 6.1-inch model.

This rumor lines up with a recent prediction from noted analyst Ming-Chi Kuo, who said that Apple plans to release a so-called "iPhone SE 2 Plus" with a nearly edge-to-edge design, a smaller notch, and a Touch ID power button on the side of the device in late 2020 or early 2021.

It's unclear if Apple will actually use "iPhone SE 2" branding or if that is simply a placeholder name for the unreleased devices. It has been speculated that the devices could also be branded "iPhone 9."

Apple plans to announce a high-end gaming computer at its annual WWDC developers conference later this year, according to a questionable and as-of-yet unsubstantiated report from Taiwan's Economic Daily News.

Details are slim, but the report claims that the computer may be a large-screen laptop or all-in-one desktop with a price tag of up to $5,000, suggesting that it could be either a MacBook Pro or an iMac Pro. The computer would supposedly be tailored towards esports, aka competitive video gaming.

Apple is rumored to be readying updated 11-inch and 12.9-inch iPad Pro models with triple-lens cameras, and based on new renders from OnLeaks, the design will be similar to the iPhone 11 Pro.

Apple did not refresh the iPad Pro lineup in 2019, but rumors have suggested that new models could be introduced as early as March 2020.

Apple may be planning to widen its Apple Watch Series 5 lineup with a new (PRODUCT)RED model at some point this year, a new rumor suggests.

The report claimed the unreleased Apple Watch briefly appeared in an unspecified Apple database, and added that it would likely be an aluminum model with a similar red finish as the iPod touch.

Apple unveiled its ‌Siri‌ Remote for the Apple TV in 2015, but it's never been a particularly popular accessory. With that in mind, Swiss company Salt created an alternative ‌Apple TV‌ remote, which we managed to get our hands on over on our YouTube channel.

We're also continuing to play with our new Mac Pro over on our YouTube channel, this week installing a speedy new SSD via PCIe. The design of the new Mac Pro makes it a super simple process to add expansion hardware like this, and we'll be looking at more options in the days and weeks to come.

Tuesday May 26, 2020 2:31 am PDT by Tim Hardwick
Apple will use a Lightning port instead of USB-C in the upcoming "iPhone 12," but it will be the last major series of Apple's flagship phones to do so, with models set to combine wireless charging and a port-less Smart Connector system for data transfer and syncing in the iPhone "13 series" next year. The above claim comes from occasional Apple leaker and Twitter user "Fudge" (@choco_bit),...
Read Full Article • 392 comments

Thursday May 28, 2020 8:13 am PDT by Eric Slivka
With the release of macOS Catalina 10.15.5 and related security updates for macOS Mojave and High Sierra earlier this week, Apple is making it more difficult for users to ignore available software updates and remain on their current operating system versions. Included in the release notes for macOS Catalina 10.15.5 is the following:- Major new releases of macOS are no longer hidden when...
Read Full Article • 312 comments

Friday May 29, 2020 10:00 am PDT by Eric Slivka
Following a couple of leaks in recent weeks, Beats today is officially announcing four new colors for its Powerbeats Pro wireless earphones: Spring Yellow, Cloud Pink, Lava Red, and Glacier Blue. The new earphones will go on sale June 9 and sell for the same $249.95 price as the existing color options. Aside from the colors, the new Powerbeats Pro models are otherwise identical to the...
Read Full Article • 47 comments