The Apple TV 4K is a fantastic little set-top box that has an easy-to-use interface, an App Store, and options to watch all kinds of content, but there's one major flaw with the device - the Siri Remote.

Apple unveiled its ‌Siri‌ (or ‌Apple TV‌) Remote with touch surface in 2015 alongside the fourth-generation ‌Apple TV‌, and it's never been a particularly popular accessory. With that in mind, Swiss company Salt created an alternative ‌Apple TV‌ Remote, which we managed to get our hands on.

Subscribe to the MacRumors YouTube channel for more videos.
Salt is a Swiss telecommunications company that offers the ‌Apple TV‌ 4K in a broadband TV bundle for its customers. There's no way to order this remote in the United States or countries other than Switzerland - it's designed only for Salt customers.

According to Salt, the Salt Remote was designed in close collaboration with Apple after the Salt TV customer base complained about the poor usability of the default remote that comes with the ‌Apple TV‌. 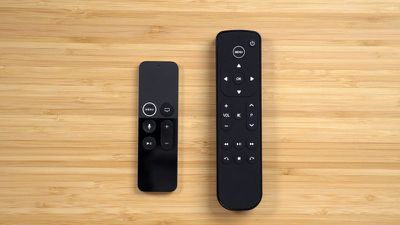 Available for just under 20 Swiss francs, the Salt Remote looks more like a traditional remote than Apple's version, and it's made from a simple black plastic with buttons for controlling multiple functions.

It is designed to connect to the ‌Apple TV‌ out of the box and requires no pairing to set up. It's both wider and longer than the ‌Siri‌ Remote, so it's harder to lose, which is probably a good thing for most people given how easy it is to misplace the ‌Siri‌ Remote.

Salt's remote features directional arrows for navigation purposes, volume controls, multiple media controls with play/pause, rewind, and fast forward, a mute button, a menu button, and a power button. All of the buttons are responsive and easy to use.

There is no microphone button for activating ‌Siri‌ because ‌Siri‌ is not an available ‌Apple TV‌ function on the ‌Apple TV‌ set-top boxes in Switzerland. Anyone who uses the current ‌Apple TV‌ remote with ‌Siri‌ for searching for content will definitely notice the lack of a ‌Siri‌ button.

Given that this is an inexpensive remote option, it is powered with two triple A batteries that need to be replaced every six months on average, but that's a minor inconvenience.

All in all, the Salt Remote is clean, simple to use, and has no fiddly touch interface to deal with. Unfortunately, given that this is developed by a Swiss company, it is unlikely to come to the United States or other countries.

Apple may have allowed an alternative remote for one telecom, but it's doubtful that Apple would allow the ‌Siri‌ Remote to be replaced in all countries. It's possible that we could, however, see a new ‌Siri‌ Remote design at some point when Apple releases an updated ‌Apple TV‌.

What do you think of the Salt Remote? Let us know in the comments.

iJon
I hope now that Ive is gone someone will wisen up and make a remote that doesn't suck.
Score: 54 Votes (Like | Disagree)

Shut up and take my money!

JPSaltzman
Just because Apple didn't "invent" it is no excuse; heck, just give the Salt company a fistful of dollars and license it at least; sell it as an overpriced accessory in the Apple Store. People will buy it.

Not all of Jony Ivie's designs are worthy of keeping around.... the butterfly keyboard, the trashcan Mac Pro, the MacBook with one USB-C port (!) .... sometimes you wonder if anyone at Apple actually tries any of their products outside of their UFO.
Score: 16 Votes (Like | Disagree)

turbineseaplane
I was super excited about this until I saw the limitations.

Why can’t somebody just make a version of this that still has a microphone with Siri and the normal Home button?

Why can’t frickin’ Apple just do this?

God this company is so bloody annoying.
Get over yourselves and make some stuff that is actually well designed for human usability.
Score: 13 Votes (Like | Disagree)

grouch
I had no idea there was so much hate for the normal remote.
Score: 10 Votes (Like | Disagree)

Most TV remotes already work with Apple TV (but not Siri), so we're not missing anything that Salt is providing. Great point about closing out apps... Guess the perfect remote would be a taller version of the current Siri Remote with the old navigation keypad right below the touch pad.
Score: 10 Votes (Like | Disagree)
Read All Comments