Apple continues to authorize free display repairs for eligible MacBook and MacBook Pro models with anti-reflective coating issues for up to four years after the affected notebook's original purchase date, the company said in an internal memo distributed to Apple Authorized Service Providers this week. 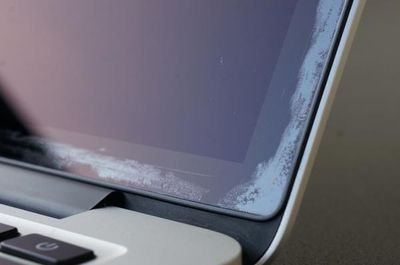 Models that remain eligible for the repair program:

Apple has not added any MacBook Pro or MacBook Air models released in 2018 or later to the eligibility list at this time.

In its memo, obtained by MacRumors, Apple adds that MacBook Pro models released in 2014 and earlier are no longer eligible for the program. Most of those units should be well past the repair program's four-year coverage window, but perhaps some were sold by resellers at a later date and were still eligible until now.

Apple began this repair program in October 2015 after some MacBook and MacBook Pro users experienced issues with the anti-reflective coating wearing off or delaminating on Retina displays. Apple has never posted the repair program to its website, opting instead to handle the matter more quietly.

Over the years, the issues have led to an online petition with nearly 5,000 signatures, a Facebook group with over 17,000 members, and complaints across the Apple Support Communities, Reddit, and our own MacRumors forums. A so-called "Staingate" website was set up to share photos of affected MacBooks.

Apple's internal service guide for this issue continues to state that customers who already incurred out-of-warranty costs related to this issue are eligible for a refund, which can be initiated by contacting Apple support.

winstars
Somehow, despite coming to this website almost every day, I did NOT know about this program. I really don't remember seeing anything about this issue. My bad...

As the owner of a early 2013 MBP whose screen looks very similar to the photo in the article above, it sucks that I am no longer eligible for a program that was apparently fairly secret...
Score: 12 Votes (Like | Disagree)

gianpan
This is so lame from Apple, my 2013 mbp screen looks like crap, yet they never felt the need to issue a recall or free repair officially, they just kept quiet about it and now I am learning I am not eligible anymore (because I am supposed to upgrade or what?).
Score: 11 Votes (Like | Disagree)

mekump
We have an late 2013 15” MacBook pro with this issue. I wish I had known about this repair program. IMO, this is something that should be repaired no matter how old the laptop is.
Score: 10 Votes (Like | Disagree)

tigerintank
Add me to the list of regular MR visitors who's disappointed in Apple keeping quiet...late 2013 owner who has had a mild version of the above for a few years now and had I known about it in time would definitely have taken it to the apple store for repair.

Tbh not sure how much difference it'll make to my next laptop decision, as a current MBP replacement is too expensive. When the time comes I'll definitely be looking at windows laptops as well - maybe I'll find similar probs there and have to adjust my expectations down...
Score: 4 Votes (Like | Disagree)

IIGS User
It kinda stinks that you have to be constantly vigilant to all the different recalls and such for $1,200+ computers that are only a few years old. If it's problem enough to be a recall, just publicly tell people. Or contact the last person the device is registered to in an Apple account.

Apple could do better. First in quality control and in customer care follow up.

I think maybe Tim focused to much on minimizing supply chain costs and not enough on quality control. Either way, these issues are simply unacceptable from such a mature product. We're not talking the first generation Core Duo MPB's here...
Score: 3 Votes (Like | Disagree)

qkypgy
Yep, went to the Apple Store in July to fix my 2014 MBP's Staingate, was told I was out of the warranty program period, and they wanted $470+ to replace the screen assembly. Insane that the screen is otherwise in perfect condition, all but the awful coating. Yet Apple called themselves eco-friendly. I ended up buying some Pledge wet wipes and just scrubbed away the coating myself. The screen is now shiny and perfect.
Score: 3 Votes (Like | Disagree)
Read All Comments