Most Downloaded iOS Apps and Games of 2019 Include Mario Kart Tour, Minecraft, YouTube and FaceTune

Along with sharing its picks for the best apps and games of 2019, Apple today also updated the App Store with Top Charts that highlight the top free apps and games, paid and free, on the iPhone and the iPad. 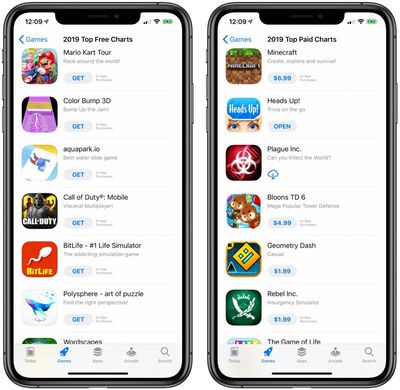 Below are the top five free ‌iPhone‌ games:

As for paid ‌iPhone‌ games, many titles that have been popular for years continued to hold on to their number one spots. Minecraft was the number one app on the paid game chart, followed by Heads Up, Plague Inc., Bloons TD 6, and Geometry Dash.

Apple also did separate top charts for the ‌iPad‌, highlighting the most popular games and apps downloaded on its tablets. The top free game was Roblox, and the top paid ‌iPad‌ game was Minecraft. Top five charts are below.

Apple separately created a top chart to highlight the most popular Apple Arcade games available for ‌Apple Arcade‌, the company's $4.99 per month gaming service. Top picks are listed below.

Apple's full ‌App Store‌ charts for the ‌iPhone‌ and the ‌iPad‌ can be found in the ‌App Store‌ under the respective Apps and Games categories for each device. Apple lists the top 20 paid and free games and apps in these charts.

If you missed it yesterday, Apple also shared its editors choice picks for the best games and apps of the year on ‌iPhone‌, ‌iPad‌, Mac, and Apple TV.

More information on all of the apps and other gaming and app trends of the year can be found in the "Today" section of the ‌App Store‌ on the ‌iPhone‌, ‌iPad‌, Mac, and ‌Apple TV‌.

kanki1985
I have been living under a rock! I have not used any of these apps or games ever!!
Score: 16 Votes (Like | Disagree)

Is there any such thing as a game that doesn’t have in-app purchases?

There's about a hundred of them on Apple Arcade.
Score: 6 Votes (Like | Disagree)

mcdj
Is there any such thing as a game that doesn’t have in-app purchases?
Score: 4 Votes (Like | Disagree)

the worst mario kart version ever

I wonder how many of the downloads have never even been played.
The first thing it does is ask to create a Nintendo account. Given the bad reviews, I never bothered to continue …

The download count is really a terrible metric to give away awards for. Especially since the game could be "pre-ordered" before reviews were in.
Score: 3 Votes (Like | Disagree)