Apple is partnering with PlayNetwork Inc. for the project, which specializes in providing music for commercial use by handling licensing and operating the service for Apple. In turn, Apple contributes by creating hundreds of unique playlists for each client. 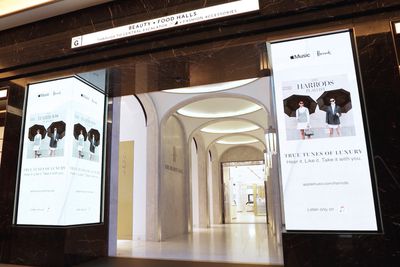 Image via Harrods/WSJ
Special business contracts must be made to use certain pieces of music in retail areas because of the high cost of licensing fees. PlayNetwork tackles these issues for clients such as Starbucks and Estée Lauder.

In these retail spaces, there are currently a few streaming services that offer business contracts for retailers, including Soundtrack Your Brand (formerly Spotify Business), Sirius XM Holdings, and more. These services cost between $25 to $35 a month per retail location.

‌Apple Music‌ for Business will now be a player in this space, but there is no indication yet as to how much Apple will charge for its service. In its six months of operation, Apple has landed 25 clients, which are estimated to deliver music to more than 10,000 store locations, including Apple's own retail stores.

One client includes Harrods in London, which had its own custom "Harrods Playlist" built by Apple. The retailer advertises this list of classical, ambient, and electronic music on screens in its stores, which users can search for and listen to in the consumer version of ‌Apple Music‌.

“We were captivated by their proposition that we could have our brand reflected in our own curated playlist,” said Guy Cheston, Harrods’s director of partnerships.

Apple Music for Business has so far focused on retail chains with 100 stores or more. But it plans on expanding into small and midsize businesses.

On the regular version of ‌Apple Music‌, the company just launched a "Replay" feature, which provides subscribers with a way to track the artists, albums, and songs they listen to the most every year. This has been a long-awaited feature on ‌Apple Music‌, and one that many of the service's rivals, like Spotify, have been doing for years.

citysnaps
Brilliant move by Apple. Starting a business streaming service makes a lot of sense and should do well.
Score: 5 Votes (Like | Disagree)

Interesting that Apple will offer this service here without requiring the use of Apple hardware.

Not really. There's a version of the Apple Music app on the Google Play store for Android devices and a web version that can be used on any windows computer. Other Apple services like Apple TV+ are available on non-Apple hardware also.
Score: 3 Votes (Like | Disagree)

apparatchik
Im an :apple: Music subscriber but from time to time I use Spotify on the “come back 3 months for 0.99” offer, Spotify is a great service and a lot of both big and smaller indie festivals/events make playlist so you can get a glimpse of some of the artists you might not know yet, these playlist 9 out of 10 times are made for Spotify. Also, Ive noticed most Android/Windows users dont event know about Apple Music being available on their platforms, so they’re go-to option, the mindshare, is mostly Spotify. As long as :apple: Music keeps improving that’s ok with me.
Score: 1 Votes (Like | Disagree)

maflynn
I can't see how they'll be able to compete with the canned music already available unless they're willing to charge less then those existing services.
Score: 1 Votes (Like | Disagree)
Read All Comments