Apple Music was today updated with a new feature called Replay, which is designed to allow ‌Apple Music‌ subscribers to take a look at the music that they listened to most in 2019.

Available on the web, in the Mac Music app, and the Music app on iOS devices, the Replay feature aggregates top songs of the year, while also providing playlists for past years too. 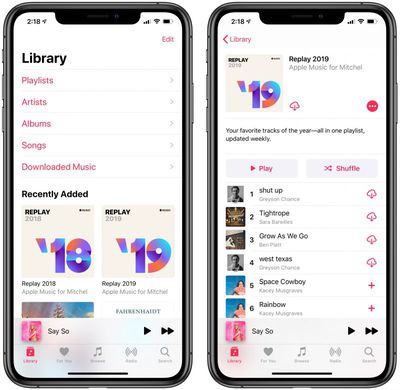 Playlists are available for every year that an ‌Apple Music‌ subscriber has had the service, dating back to 2015. Replay playlists can be added to the ‌Apple Music‌ Library so they can be streamed right alongside other playlists and shared with others.

According to TechCrunch, Replay will continue to be updated throughout the year, changing and evolving as a person's musical tastes and interests shift.

Apple plans to update the Replay playlist each Sunday with new songs and data insights to reflect each person's current listening activity.

‌Apple Music‌ has never offered an aggregated year-end playlist with song data, something that Spotify has provided for years with its Wrapped experience. Apple now has an equivalent feature, and one that is perhaps more useful given the fact that it's updated on an ongoing basis.

‌Apple Music‌ subscribers can access Apple Music Replay on the web and add the playlists to iOS or Mac devices. Replay should also be available in the iOS and Mac Music apps without the need to use the feature on the web, but it's still in the early stages of rolling out and not available on every platform yet.

I wouldn't consider adding 1 to a play counter when you listen to a song "tracking behavior" you should be worried about.
Score: 9 Votes (Like | Disagree)

Not in my music app?‍♂️

I had to use the link in the article to get to the playlist on the web and then there was an Add button that added it to the iOS app
Score: 7 Votes (Like | Disagree)

JesperA
Great, but is there a way to tell Apple Music to "just give me a boatload of songs you suggest from a plethora of genres", now its only radios based on songs so the songs in the radio is basically the same but i like all types of music that i want mixed in a big random suggested playlist.
Score: 6 Votes (Like | Disagree)

Ok so there is nearly zero difference now between Spotify and Apple Music other than personal preference. They have identical feature sets.

It really just comes down to UI and algorithms. Apple music tends to recommend a ton of rap and hip hop even though I've told it a million times I don't like it. Their top charts are just loaded with it and i'm not seeing that from other services whose top charts are more balanced.
It continues to recommend things I've thumbed down. Like rating songs does nothing.
When I play a radio station based off of a song it matches weird songs that don't really go with it. These are the areas spotify excels.
I like spotifys daily drive. And daily mixes.
I prefer the spotify UI though apple music looks much better now that it has dark mode. Just personal preference.
Aside from those algorithms they're pretty much the same. And I'm sure apple music will improve in this area over time.
Score: 3 Votes (Like | Disagree)

On iOS:
Settings > Music > toggle off "Use Listening History"

No more tracking for you. Bear in mind this also shuts off playlist recommendations, play counts, and every other feature that requires checking what you are listening to.
Score: 3 Votes (Like | Disagree)

Looks like I've listened to 300 hours this year and my favorite album was Disguise by Motionless In White. I'm curious what other people's top album is :)

261 hours and Condolences by Wednesday 13