Apple today released a new firmware update for the AirPods Pro, which were originally released on October 30.

Today's firmware update is labeled as 2B588, up from 2B584, which was the release version of the firmware that the ‌AirPods Pro‌ shipped with. 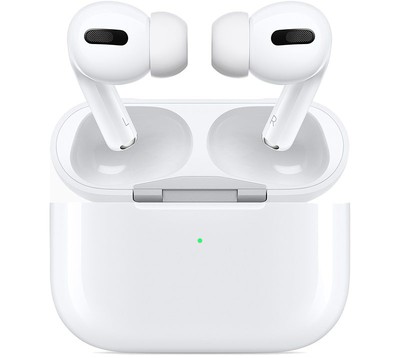 There's no word on what's included in the firmware update, but it may improve connectivity or resolve other small issues with the earbuds.

The firmware update will install automatically when connecting the ‌AirPods Pro‌ to your iPhone or iPad, and it could take some time for the update to become available for everyone. To check the firmware of your ‌AirPods Pro‌, follow these steps:

Because of a firmware update?

My freaking Nintendo Switch has had like 20+.. does that mean it is not ready to ship?

zombierunner
There will be a day when we will download firmware updates for the toothbrush.
Score: 28 Votes (Like | Disagree)

It's obvious you know nothing about technology.
Score: 28 Votes (Like | Disagree)

There will be a day when we will download firmware updates for the toothbrush.

after the bug in the initial software release knocks half of your teeth out.
Score: 21 Votes (Like | Disagree)

I hate how prone the ear tips are to lint/hair/dust. Pain to clean.

Their supposed to be in your ear or in the case, not under the couch.. Jesus
Score: 17 Votes (Like | Disagree)
Read All Comments

Friday July 10, 2020 11:12 am PDT by Juli Clover
Apple this month published a support document that warns customers against closing their Mac notebooks with a cover over the camera as it can lead to display damage. Image via Reddit Apple says that the clearance between the display and the keyboard is designed to very tight tolerances, which can be problematic. Covering the camera can also cause issues with automatic brightness and True Tone....
Read Full Article • 210 comments

Wednesday July 8, 2020 3:14 pm PDT by Juli Clover
Apple is working on Macs that use its custom Apple-designed Apple Silicon chips instead of Intel chips, but Apple has committed to continuing to support Thunderbolt, reports The Verge. In a statement, an Apple spokesperson said that Apple's upcoming machines will offer support for Intel's Thunderbolt USB-C standard. "Over a decade ago, Apple partnered with Intel to design and develop...
Read Full Article • 219 comments

Friday July 10, 2020 2:58 am PDT by Tim Hardwick
At last month's WWDC, Apple officially announced that its Mac computers will be transitioned from Intel x86 to homegrown Apple Silicon chips. Apple said it plans to deliver the first Apple Silicon Mac by the end of the year and complete the transition in about two years. According to Apple analyst Ming-Chi Kuo, a 13.3-inch MacBook Pro with a form factor similar to the current 13.3-inch...
Read Full Article • 143 comments