Monday November 11, 2019 6:49 am PST by Joe Rossignol
Today is Veterans Day in the United States and, as usual, Apple CEO Tim Cook has thanked veterans around the world for their service.

"Never was so much owed by so many to so few." — Winston Churchill. To the Veterans in my family, at Apple, and all around the world — we appreciate your service and sacrifice. 🇺🇸 #VeteransDay


Apple is also showing its support for Veterans Day with a short message on its website: "Here's to the brave ones. We're proud to honor America's veterans and service members this Veterans Day and every day." 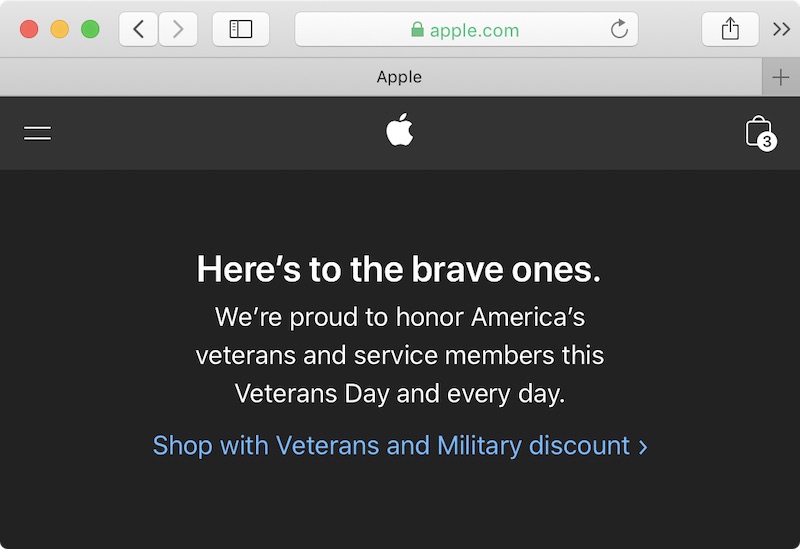 As noted by Kyle Seth Gray, Apple Watch users can earn a special Veterans Day badge in the Activity app today by completing any workout for 11 minutes or longer. The annual Activity Challenge, limited to the United States, also awards users with a Veterans Day sticker for use in the Messages app.

This Veterans Day, November 11th, earn a special award by doing any workout of 11 minutes or more. #CloseYourRings pic.twitter.com/liyLfyGOxf


In addition to that poor discount, it seems Apple does not offer any such discount to customers in "friendly" allied countries such as Canada, Australia, UK...

Very happy to take those "foreign" customer's cash and not even interested in giving the same token discount as US vets.


If you're so upset about it then don't purchase their products. Problem solved.
Rating: 12 Votes

If you're so upset about it then don't purchase their products. Problem solved.


As a veteran, I am happy that Apple extends a discount on all products and not just the refurbished, close-outs, etc. one finds on sale at non-Apple stores & websites. Thanks, Apple.
Rating: 12 Votes


10% is better than NO %!
As a veteran, I like the discount. You're most likely NOT a veteran, so why carp about what you can't get?
Rating: 10 Votes

AJClayton
Quite nice to see Tim quoting Churchill. For those who are interested (and don't know) this is taken from his famous speech about the Battle of Britain in 1940. And yes, the war DID start before December 1941.

We call it Remembrance Day here in the UK. I'm thinking especially of my two Great Uncles who died in battles in France during The Great War. It's thanks to people like them that I can sit at my desk over a hundred years later and worry about trivial, non-important things that I really shouldn't get upset about.
Rating: 9 Votes

acorntoy
Sad to see how little people know about war history, but everybody can think what they want, because of our veterans. Thank you all.
Rating: 6 Votes


You are suggesting Apple sell its products at a loss to Veterans? Why? FYI I am a Vietnam Veteran and use the very nice Apple Military offerings.
Rating: 5 Votes

rjp1
Tim China may be the most disingenuous person alive.
Rating: 4 Votes

'Today is Veterans Day in the United States and, as usual, Apple CEO Tim Cook has thanked veterans around the world for their service.".


What about Michiel de Ruyter, a famous Dutch Marine Officer who sailed upwards the river Thames in June 1667 and defeated the English fleet, the greatest marine-based defeat in the history of England. Very brave! I like to get a discount in June for that matter

I understand, America first, but can we, Holland, be second? (don't worry, it's not serious....)

As I said, I’ve never heard it said with insincerity. And nonetheless the response is the same: nod or ignore. How to react to a thank you is not baffling except to the drama-prone. Jeez.


I admit, as the daughter of a Vietnam veteran, the first time I came across this discussion I was shocked that a simple gracious “thank you” could ever be considered insufficient, and even insulting and disingenuous.

I’ve grown up around enough people who lost a loved one to war to know that these simple thankyou’s aren’t just for the recipient, but often for the speaker’s parent, or sibling, or child or friend who didn’t make it back to hear those words of gratitude. When we say thank you to one veteran we are saying thank you to the fallen we carry in our hearts forever.

I do not know why some veterans now assume civilians are so far removed from appreciating what they do that they assume we aren’t doing other things to honor our veterans.

My father came back from serving combat duty in Vietnam and found a country entirely hostile and suspicious of his service. He would have loved a heartfelt thanks for his service in those dark days back, but that wasn’t the politically correct thing to do among his generation back then, either.

He has greatly enjoyed the past few decades of acknowledgement for his service and for his comrades. A simple thanks has been a lovely exchange he could enjoy with strangers in passing who would notice his dog tags and give him a quick acknowledgment. It truly has meant so much to an elderly man who misses all of his army buddies who have passed on.

It’s sad to see that gentle courtesy come to an end, but if a simple thank you is now cause for awkwardness and discomfort, and our silence is now preferred over an “insufficient” brief thank you, so be it. It’s a new generation of veterans and families out there and their wishes must be respected.

I do think this was a nice gesture on Apple’s part. But I’m gradually on my way out of this world and my opinion does not matter anymore.
Rating: 3 Votes