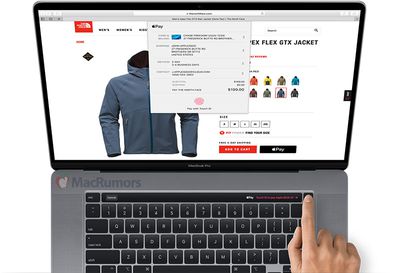 While all three of those features line up with other images of the 16-inch MacBook Pro uncovered in macOS Catalina 10.15.1, we cannot confirm if this latest image is legitimate. It certainly looks believable at face value, but we cannot find the file in any recent macOS Catalina builds and it could be photoshopped.

Our anonymous tipster claims the 16-inch MacBook Pro will be equipped with AMD Radeon RX 5300M or 5500M graphics, part of its Navi line. That is also unconfirmed, but MacRumors contributor Steve Moser did recently uncover a "Radeon RX 5500/5500M" string within macOS Catalina 10.15.1 code.

MacRumors leaked a similar image of the 2016 MacBook Pro a few days ahead of Apple announcing that notebook, and it turned out to be legitimate. The image depicts a user authenticating an Apple Pay purchase with Touch ID.

Last month, an icon corresponding to a 16-inch MacBook Pro was uncovered in the macOS Catalina 10.15.1 beta, revealing slimmer bezels and what appears to be a physical Esc key after zooming in closely, which would certainly please critics of the virtual Esc key on the Touch Bar now.

Then, a few days ago, a close-up image of a standalone Touch ID sensor was uncovered in the release version of macOS Catalina 10.15.1.

Back in July, Apple analyst Ming-Chi Kuo said the 16-inch MacBook Pro would be equipped with a scissor switch keyboard, with Apple finally beginning to move away from its troublesome butterfly keyboard design. At that time, Kuo also predicted the notebook would be released in the fourth quarter of 2019.

Update: A couple of additional hints, including the "Touch ID to pay Apple" text taken from a similar image asset for the 13-inch MacBook Pro not matching the North Face website taken from a version of the asset for the MacBook Air, suggest that this is very likely a fake.

Update November 15: The leaked image turns out to have been real after all. It appears during the setup process of the new MacBook Pro.

Rychiar
whyyyy Touch ID? its a laptop, you open it, it sees your face right away. its costs alot. just add Face ID!!!
Score: 44 Votes (Like | Disagree)

Icaras
Sweet Jesus. Can we please get those bezels on the next iMac too please?
Score: 11 Votes (Like | Disagree)

Sneakz
Looks fake. Why would the Touch Bar display “Touch ID to pay Apple” when purchasing from the North Face? Even the screen itself says TNF. Nor do the prices match.
Score: 11 Votes (Like | Disagree)

edit: and the same $326.20 transaction amount, which actually matched the 2016 transaction shown on the screen...
Score: 11 Votes (Like | Disagree)
Read All Comments

Friday January 21, 2022 6:11 am PST by Hartley Charlton
Following months of bleak news about Peloton's "precarious state," including the revelation that it has halted production of its bikes and treadmills, Apple is being floated as a potential buyer of Peloton's troubled fitness business. Yesterday, CNBC reported that Peloton will temporarily stop production of its connected fitness products due to a "significant reduction" in consumer demand, a ...
Read Full Article • 319 comments