Icons possibly depicting the widely rumored 16-inch MacBook Pro have been uncovered by French blog MacGeneration in the first two betas of macOS Catalina version 10.15.1, which has been in testing since last week.

The icon looks similar to the 15-inch MacBook Pro asset that is included in previous versions of macOS, but with slightly thinner bezels. The notebook is depicted in both Silver and Space Gray, with "16" in both filenames presumably referring to the larger 16-inch display expected for the rumored machine. 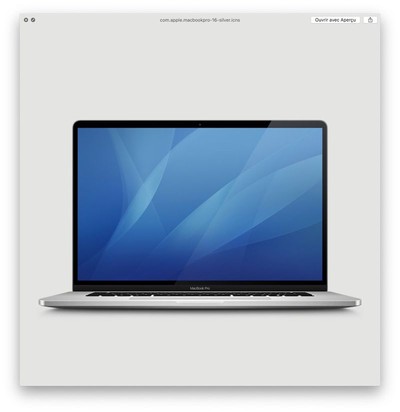 MacRumors can confirm the files exist in the second beta of macOS Catalina 10.15.1:

The icons also have a corresponding MacBookPro16,1 model identifier that Apple has never used. The latest 15-inch MacBook Pro has a MacBookPro15,1 identifier, according to a support document on Apple's website.

Earlier this year, noted analyst Ming-Chi Kuo said Apple is readying a 16-inch MacBook Pro with an all-new design, including the return of a more reliable scissor mechanism keyboard, for release by the end of 2019. However, it is unclear if the notebook is still planned for this year or has been pushed back to 2020.

The 16-inch MacBook Pro is rumored to feature narrower bezels, as the icons above suggest, perhaps allowing the larger display to fit in a notebook with a similar physical size as the current 15-inch MacBook Pro.

pookitoo
the designers at apple are on strike
Score: 39 Votes (Like | Disagree)

Mayo86
I don't think these are place holder images. If you go to the link in the article to the source website, there is a side-by-side comparison of the 2. You can clearly see there is a difference between models in their bezels.

shanson27
I was expected something more radical, a whole new design.
Score: 17 Votes (Like | Disagree)

dan9700
still same bezels just slightly smaller at the top, this isn't what I expected
Score: 16 Votes (Like | Disagree)
Read All Comments

Friday July 23, 2021 9:37 am PDT by Juli Clover
Apple is developing an external display that includes an A13 chip with Neural Engine, according to a new rumor from 9to5Mac. The A13 chip with Neural Engine would presumably serve as an eGPU, though details are light at this time. Having a CPU/GPU built into the external display could help Macs deliver high-resolution graphics without using all the resources of the computer's internal chip....
Read Full Article • 222 comments