Apple this week published environmental reports for the new iPhone 11, iPhone 11 Pro, and iPhone 11 Pro Max, revealing that the Taptic Engine in all three devices is made of 100 percent recycled rare earth elements. 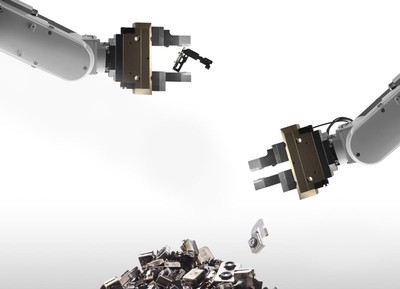 The Taptic Engine, which powers haptic feedback, represents around 25 percent of the total rare earth elements used in each iPhone.

"This is one of those happy coincidences where what is good for the planet is really good for business at the same time," Apple's environmental chief Lisa Jackson told Reuters. "One of the things we talk about a lot internally, just in general, is how much more resilient this makes our supply chain."

Apple is able to recover and sort some rare earth elements using its recycling robot Daisy.

The taptic engine is made out of cash? That's pretty cool. Seems like a bit of a waste though.
Score: 5 Votes (Like | Disagree)

For years, Greenpeace would complain that Apple didn't do enough for the environment. So Apple started doing these reports to say "actually, we're doing plenty".
Score: 3 Votes (Like | Disagree)

For years, Greenpeace would complain that Apple didn't do enough for the environment. So Apple started doing these reports to say "actually, we're doing plenty".

Actually, that was Greenpeace not comparing what company _did_ for the environment, but what they said publicly. I remember them praising HP and condemning Apple because HP promised they would get rid of some led related stuff in the next years - while Apple had already done it without telling anyone.

Clearly they learn from this.

It’s such a lame sales pitch. I’ve always lost a bit of respect for companies that advertise, how green or eco friendly or diverse or *insert anything here* they are. If you really care about it- just do it. Why announce it publicly? Obviously to gain some sort of tangible result. Like- “ Wow, I always used Huawei phones, but now, that I know, that Apple is making some kind of small part from some kind of recycled metal- screw that earth destroying Chinese company” .

You say it's a "lame sales pitch". As I said, ten years ago Apple got hugely negative press from Greenpeace because they did things without telling anyone, while Greenpeace applauded companies for just _promising_ they would do the same thing.
Score: 2 Votes (Like | Disagree)

Why not make this move sooner?

No idea, but you seem to suggest that the only possible answer is nefarious.
Score: 1 Votes (Like | Disagree)
Read All Comments

Wednesday July 1, 2020 10:48 am PDT by Juli Clover
Benchmarks for an unreleased iMac equipped with a 10th-generation Core i9 Intel Comet Lake-S chip and an AMD Radeon Pro 5300 graphics card have surfaced, giving us an idea of what we can expect from a refreshed 2020 iMac. The Geekbench benchmarks, which appear to be legit, were found on Twitter and shared this morning by Tom's Hardware. The iMac in the benchmarks would be a successor to the...
Read Full Article • 213 comments

Wednesday July 1, 2020 1:57 am PDT by Tim Hardwick
Leaker L0vetodream this morning posted a tweet corroborating recent rumors that Apple's "iPhone 12" lineup won't come with EarPods or a charger in the box, adding that this will also eventually apply to the existing second-generation iPhone SE. L0vetodream also claims that future iPhone packaging will be "thinner" and "exquisite," which would make sense if Apple's handsets are set to come in ...
Read Full Article • 249 comments

Monday June 29, 2020 7:48 am PDT by Joe Rossignol
While the terms and conditions for Apple's new "Developer Transition Kit" forbid developers from running benchmarks on the modified Mac mini with an A12Z chip, it appears that results are beginning to surface anyhow. Image Credit: Radek Pietruszewski Geekbench results uploaded so far suggest that the A12Z-based Mac mini has average single-core and multi-core scores of 811 and 2,781...
Read Full Article • 414 comments