Apple today shared its 2018 environmental report [PDF], outlining all of the improvements and changes that were implemented throughout 2017 and early 2018 to lessen the company's overall environmental impact.

As was announced earlier this month, Apple recently hit a major milestone and longtime environmental goal, with 100 percent of its operations around the world powered by renewable energy. Apple has also convinced 23 of its suppliers to commit to using 100 percent renewable energy so far. 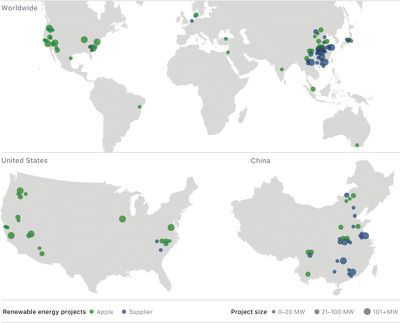 A breakdown of Apple's carbon footprint
Through its unwavering commitment to renewable energy, improvements to energy efficiency, and a reduction in emissions from aluminum manufacturing, Apple has reduced emissions by 54 percent worldwide since 2011, and as of 2018, 66 percent of the renewable energy Apple procures comes from Apple's own projects.

Over the course of 2017, Apple worked to implement energy efficiency improvements to its facilities around the world, including Apple retail stores. Upgrades were made to LED lighting, heating, ventilation, and air-conditioning systems, resulting in an overall electricity savings of 3.7 million kilowatt-hours per year.

Apple's overall energy footprint was reduced by 14.7 million kWh and 225,000 therms in fiscal 2017, and combined with other efficiency measures implemented since 2011, Apple cumulatively saves 70 million kWh of electricity and 2.4 million therms of natural gas per year. The company has also worked directly with its suppliers to audit facilities and find opportunities for better energy efficiency, with the program saving an annualized 320,000 metric tons of C02e from entering the atmosphere in 2017.

Daisy has a smaller footprint than Liam and can disassemble multiple models of iPhone with higher variation compared to the earlier robot. Using Daisy, Apple was able to make progress towards its goal of creating products without mining materials from the earth, aka the closed loop supply chain that it announced as a goal in 2017.

Apple says that in 2017, it invited "key stakeholders" to small "closed-door roundtables" in Europe, the U.S., and China to get targeted feedback on its closed-loop supply chain ambitions. Apple spoke with academics, NGOs, industry leaders, and other companies.

The company has also been investing in research to figure out the barriers to implementing a closed-loop system, and it has been launching pilot programs to determine possible solutions. Apple outlines several materials and programs it's currently focusing on, including aluminum (sourced from old iPhones), cobalt (battery scrap is now shipped to a recycler), copper (reducing copper usage on PCBs), glass (new reuse and reprocess methods), paper (sustainable forests), plastics (aiming to eliminate plastics), rare earth elements (exploring new recycling technologies), steel (increasing recycled content), and tungsten (recovered from the Taptic Engine and sent to specialty recycler).

Apple's main accomplishment in 2017 was the use of 100 percent recycled tin for the solder on the main logic board in the iPhone 6s. Recycled tin is now being used for the iPhone 7, iPhone 7 Plus, iPhone 8, and iPhone 8 Plus.

For those interested, Apple's full environmental report [PDF] goes into much greater detail on landfill usage, water usage, dangerous materials, recycling, product efficiency, and more, and it's well worth reading if you want to brush up on Apple's environmental protection efforts.

I don't know about you guys, but mass dumping (producing) millions of iPhones with batteries by the week and churning them out all over the world doesn't really seem environmentally friendly to me...

Don't drink the Kool-aid with a spin to it, guys.

You must be that one guy who enjoys Angry Birds on his landline.
Score: 8 Votes (Like | Disagree)

T'hain Esh Kelch
This may well end up being Cooks largest legacy, and a very important one at that.

Cudos to Apple for being a forerunner and global symbol for the environment.
Score: 8 Votes (Like | Disagree)

I don't know about you guys, but mass dumping (producing) millions of iPhones with batteries by the week and churning them out all over the world doesn't really seem environmentally friendly to me...

Don't drink the Kool-aid with a spin to it, guys.

So, you must know some other company making mobile devices without batteries? Please share! Otherwise, your comment makes no sense at all.
Score: 6 Votes (Like | Disagree)

Dilster3k
I don't know about you guys, but mass dumping (producing) millions of iPhones with batteries by the week and churning them out all over the world doesn't really seem environmentally friendly to me...

Don't drink the Kool-aid with a spin to it, guys.
Score: 6 Votes (Like | Disagree)

Martius
I think that the most eco-friendly product is the one that lasts not just for one / two years. Ok, I get it, average person buys a new phone every two years, but what about computers and their upgradability? If I could simply upgrade ram / SSD on my MBP, it would be usable for a longer period of time. If the iPhone is designed to be simply repairable and the repairs are cheaper (not like $500 to replace the iPhone X back), a lot of people would be using their phones for a little longer... etc. etc.

This is pure marketing, they care more about the money than the environment.
Score: 4 Votes (Like | Disagree)