The Apple Watch Series 5 is set to launch this Friday, September 20, but the embargo for the first reviews of Apple's latest smartwatch ended this morning. Several journalists and media outlets were provided with review units, so we've gathered together some key takeaways and highlights. 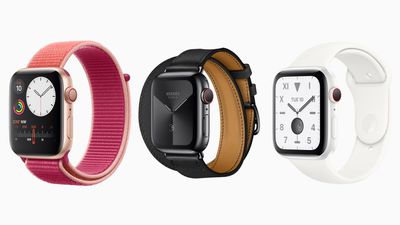 Not a lot is new with the Apple Watch Series 5, and it's identical in design to the Series 4. The exception is the display, which uses a lower power (LTPO) OLED screen that enables Apple's new always-on display feature.

To accommodate the new always-on display, Apple has created new battery-optimized watch face options that allow you to see the time and your complications at all times. Apart from a new built-in compass and a new international emergency calling feature for LTE models that contacts the local emergency services when SOS is activated, other new features are software-based and will come courtesy of watchOS 6.

As you'd expect, the focus of many of the reviews is on that always-on display. TechCrunch's Catherine Shu says it "addresses a longstanding issue with the device," but one that has been understandable because of battery considerations. To get around this, Apple has "made a bit of a compromise" by offering an always-on watch that lasts the same stated 18 hours as its predecessors.

Apple's employed some clever fixes to ensure that the new feature won’t totally sap battery life. Each of the faces gets a low-power, always-on version. In the case of the Meridian face that I've been using (new for WatchOS 6), it's white text on a black background. Hold the watch up to your face, however, and the colors invert. The active version is easier to see, and the always-on version uses less power.

While complications and other features are still on display, they're simplified, removing any power-hungry features. That means the second hand disappears on the standard watch face, and when the watch is in workout mode, the milliseconds will disappear until you bring the watch back up to your face.

Ultimately, Shu reckons "there's probably not enough here to warrant an upgrade from last year’s model, but some welcome new features like the always-on help keep the line fresh."

Daring Fireball's John Gruber says that the always-on display "solves my single biggest complaint about Apple Watch since day one. Its not perfect," he says, "but it's more than good enough. No other feature or improvement to Apple Watch to date has ever made me this happy."

As for the built-in compass, Gruber says that "while it's fun to play with, I don’t recall ever needing a compass in my entire life." However, he was impressed by the way it overcomes the problem that magnets pose to traditional compasses.

Traditional compasses spin randomly when you bring a magnet near them. Series 5's compass won't do this, because it uses the gyroscope to see if you're actually moving. The compass won't be fooled by a magnet because it can tell the watch itself isn't spinning around. Smart.

The Verge's Dieter Bohn starts his review by covering the new materials for the Apple Watch casing, specifically the more expensive titanium and ceramic.

There are some subtle weight differences on the more expensive materials, and they also have sapphire glass on the front of the Watch. But you should not spend the extra money on those more premium materials in the hope that they’ll be better from a feature perspective. They're the same Apple Watch; you'd just be paying more for something fancier. Some people like doing that!

Bohn also admits his long-running desire for an always-on screen, which is made possible by the low-temperature polycrystalline oxide (LTPO for short) display that Apple has designed.

I love the always-on screen on the Series 5. Apple's implementation is better than other smartwatches I've used for two reasons: it legitimately doesn't hurt the battery life as much, and Apple keeps a little color visible in ambient mode.

For whatever reason, I've never been able to get earlier Apple Watches to show their screens with subtle wrist movements. I've always had to cartoonishly raise my arm. An always-on screen means I am a little bit less of a jerk in conversations and meetings.

Bohn confirms that the display doesn't deplete the battery faster than the stated 18 hours, although he notes that "the Series 4 usually outperformed that estimate."

Apart from the new compass and LTE-based Emergency Call features, Bohn sees little else to recommend existing Apple Watch Series 4 owners and admits he's more excited about features coming with watchOS 6, like the new health features and the dedicated App Store, which he thinks are worth checking out first before anyone thinks of upgrading.

I’m happy upgrading from a series 2. A “series 4S” was exactly what I was looking for.

Yeah this is a very very good upgrade for anyone on Series 0 thru 3.

It’s funny when reviewers say “not worth the upgrade” as if only people with the Series 4 are looking for a new watch.
Score: 25 Votes (Like | Disagree)

itsmilo
I am upgrading from a series 0 so anything will be welcome change iol
Score: 17 Votes (Like | Disagree)

dan9700
maybe add iCloud messaging im sick of deleting messages from my watch when they are removed from iCloud
Score: 13 Votes (Like | Disagree)

waaaas
I am upgrading from no watch to series 5 :D
Score: 11 Votes (Like | Disagree)

Agit21
Now we just need like at least 4 days battery life and its near perfect.
Score: 10 Votes (Like | Disagree)

Yeah this is a very very good upgrade for anyone on Series 0 thru 3.

It’s funny when reviewers say “not worth the upgrade” as if only people with the Series 4 are looking for a new watch.

Yeah same with people commenting on the iPhone. It’s a constant evolution, you can’t expect a miracle every year.
Score: 9 Votes (Like | Disagree)
Read All Comments