Apple today announced it is awarding its longtime iPhone, iPad, and Apple Watch glass supplier Corning an additional $250 million from its Advanced Manufacturing Fund, building on its $200 million award in 2017. 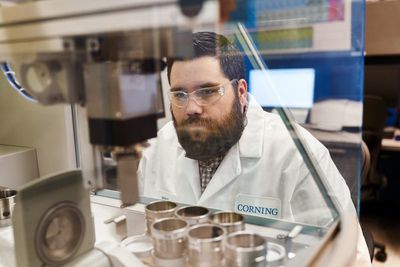 The combined $450 million investment will support Corning's research and development into "state-of-the-art glass processes, equipment and materials integral to the delivery of next-generation consumer devices," including the upcoming ‌iPhone‌ 11 and ‌iPhone‌ 11 Pro lineup, according to Apple.

Apple and Corning's rich history dates back more than a decade, and our partnership revolutionized glass and transformed the technology industry with the first iPhone. This award underscores Apple and Corning's shared belief in the vital role that ingenuity plays in creating industry-leading products, and the pride that both companies take in applying American innovation and advanced manufacturing to solve some of the world's toughest technology challenges.

Apple says it Advanced Manufacturing Fund was designed to "foster and support the innovative production and high-skill jobs that will help fuel a new era of technology-driven manufacturing" in the United States. To date, Apple has invested over $1 billion in American companies from the fund.

In addition to the $450 million now awarded to Corning, other commitments already announced include $390 million to Finisar and $10 million to the joint venture Elysis working towards carbon-free aluminum smelting.

Apple says it spent a collective $60 billion with 9,000 American suppliers in 2018, supporting 450,000 jobs in all 50 states and manufacturing locations in 36 states. ‌iPhone‌ 11, ‌iPhone‌ 11 Pro, and iPhone 11 Pro Max use glass manufactured at Corning's factory in Harrodsburg, Kentucky.

Corning has partnered with Apple since 2007 to provide glass for every generation of the ‌iPhone‌ and Apple Watch, and many generations of the ‌iPad‌, all manufactured in the Harrodsburg facility. Since the ‌iPhone‌ launched in 2007, Apple has spent nearly $3 billion with Corning on the glass used in those devices.

I kind of wish Apple would say their products contain gorilla glass sometimes. I can’t even count how many android fanboys I’ve seen that think that iPhone screens are brittle and delicate compared to their phones when they both use the same damn glass...

When you drop it and it breaks, it really doesn't matter what kind of glass it is.
Score: 12 Votes (Like | Disagree)

They use the same brand glass, but I’m not sure that they use the same glass. Glass in any other domain has various grades. I’m willing to bet that there are multiple grades and generations of Gorilla Glass.

I thought this was common knowledge. We're currently on Gen 6 of Gorilla Glass.
[doublepost=1568722079][/doublepost]

I don’t know if Corning makes the coating, but I would love love love to see more scratch resistant coating.

The glass can be nearly indestructible but if the outer coating scratches when you look at it wrong, it’s still not a great user experience.

A lot of the time the scratches you see are in the oleophobic coating. That coating is not permanent and wears over time. You can DIY replace it. Doing so can sometimes lessen the appearance of micro scratches.
Score: 9 Votes (Like | Disagree)

ersan191
I kind of wish Apple would say their products contain gorilla glass sometimes. I can’t even count how many android fanboys I’ve seen that think that iPhone screens are brittle and delicate compared to their phones when they both use the same damn glass...
Score: 6 Votes (Like | Disagree)

incoherent_1
I don’t know if Corning makes the coating, but I would love love love to see more scratch resistant coating.

The glass can be nearly indestructible but if the outer coating scratches when you look at it wrong, it’s still not a great user experience.
Score: 4 Votes (Like | Disagree)

unibility
Glass is glass. And glass will break.
Score: 3 Votes (Like | Disagree)

I kind of wish Apple would say their products contain gorilla glass sometimes. I can’t even count how many android fanboys I’ve seen that think that iPhone screens are brittle and delicate compared to their phones when they both use the same damn glass...

They're idiots. It wouldn't matter if Apple advertised that they use gorilla glass. They would still think their crap phones with outdated software are better because they can "customize" them.
Score: 3 Votes (Like | Disagree)
Read All Comments