Apple today seeded the second beta of an upcoming iPadOS and iOS 13.1 update to developers, one week after seeding the first beta and ahead of the actual launch of iOS 13 and iPadOS. 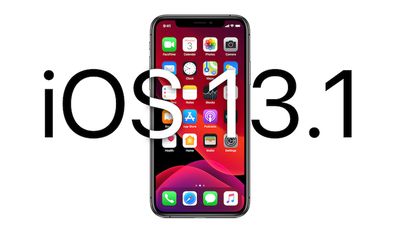 Apple in late August released the first iOS 13.1 beta, which came as a surprise because Apple has never released a point update for software that's not out yet. Apple is likely aiming to make iOS 13.1 ready for download shortly after iOS 13 becomes available and new iPhones launch, as the iOS 13 update may have already been finalized for installation on new devices.

There are some other smaller changes in iOS 13.1, which are outlined in our first iOS 13.1 article. If we find new features in iOS 13.1 beta 2, we'll update this post.

You don't get to complain until the final version comes out
Score: 24 Votes (Like | Disagree)

sniffies
10 betas and Mail and iCloud Drive are still a huge toxic hellstew of bugs
Score: 21 Votes (Like | Disagree)

Braderunner
Hope this fixes the battery drain issue for the Watch. :rolleyes:
Score: 17 Votes (Like | Disagree)

Why do people make unfounded claims like this without saying “I think” first?
Score: 15 Votes (Like | Disagree)

Are they ever going to allow users to install 3rd party dictionaries ? iOS/iPadOS 13.1 is still missing some key languages and there is absolutely no way of adding those to the system.

That document is fake, so I wouldn't count on anything that's in there being accurate.
Score: 9 Votes (Like | Disagree)
Read All Comments