Timed with the Apple Card launching widely in the United States today, Apple has announced that customers will now receive three percent Daily Cash when they use the Apple Card with Apple Pay for Uber and Uber Eats purchases. 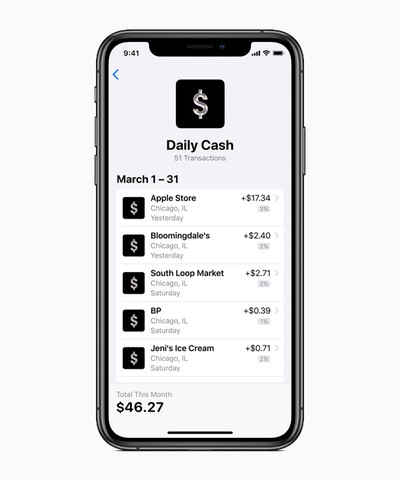 The three percent reward was initially limited to purchases made directly with Apple, including at Apple Stores, Apple.com, the App Store, the iTunes Store, and for services like Apple Music and iCloud storage subscriptions.

To apply for an ‌Apple Card‌, simply open the Wallet app on an iPhone running iOS 12.4 or later, tap the plus button in the top-right corner, and follow the on-screen steps. The process takes just a few minutes, and if approved, your digital ‌Apple Card‌ will be ready for purchases immediately.

Daily Cash is unlimited and paid out daily to your Apple Cash account. For more details, make sure to check out our Apple Card guide.

M.PaulCezanne
I wouldn't give money to Uber if I were having a heart attack and it was the only transportation available to the hospital, but expanding 3% could get very interesting...
Score: 25 Votes (Like | Disagree)

Dov.sakinis
Really hope they expand it to some grocery stores. Then 3% cashback would be a sole reason to get this card and a lot of Apple Card haters would rethink their criticism. In the meantime, it’s still just an average credit card. I like it as it’s convenient and I do not care about APR, never missed a payment and no planning to buy more than I can afford to
Score: 12 Votes (Like | Disagree)

Next we need to get more merchants to accept Apple Pay.

This depends on where you live but in Toronto, Apple Pay is accepted virtually everywhere. I’ve used ApplePay at large chains but also at an ice cream truck. Canada has had tap payments for a few years now so it’s pretty much everywhere. I’m so confident that ApplePay will be accepted that I have stopped carrying a wallet. My physical cards are in a drawer at home. When I walk my dog I don’t even take my phone. If I want to buy a bottle of water or a snack, I’ll tap my Watch at a food truck. Works every time. Livin’ the dream.
Score: 11 Votes (Like | Disagree)

Isn't cash back a scam ?

Why not just have a lower interest rate ?

Cash back is meaningless on any card you don’t pay off completely every month. Period.
Score: 9 Votes (Like | Disagree)

I know its fun to bag on Uber but on my last vacation Uber was invaluable - Uber (or a service like it) its indispensable IMO.
Score: 9 Votes (Like | Disagree)
Read All Comments

Wednesday June 16, 2021 7:11 am PDT by Hartley Charlton
With no sign of redesigned MacBook Pro models at this year's WWDC, when can customers expect the much-anticipated new models to launch? A number of reports, including investor notes from Morgan Stanley and Wedbush analysts, claimed that new MacBook Pro models would be coming during this year's WWDC. This did not happen, much to the disappointment of MacBook Pro fans, who have been...
Read Full Article • 159 comments

Wednesday June 16, 2021 10:49 am PDT by Juli Clover
Apple CEO Tim Cook this morning participated in a virtual interview at the VivaTech conference, which is described as Europe's biggest startup and tech event. Cook was interviewed by Guillaume Lacroix, CEO and founder of Brut, a media company that creates short-form video content. Much of the discussion centered on privacy, as it often does in interviews that Cook participates in. He...
Read Full Article • 170 comments