Apple Music today released a new playlist called "ALT CTRL," which is a rebranded version of its previous "The A-List: Alternative" playlist. This list of songs includes alternative bands and is currently headlined by HAIM's new single, "Summer Girl" (via Billboard). 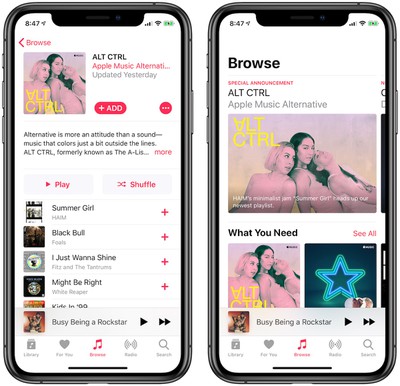 "Alternative is more an attitude than a sound -- music that colors just a bit outside the lines. ALT CTRL, formerly known as The A-List: Alternative, is where you'll find the best of those new left-of-center tunes."

Apple has slowly been rebranding its "The A-List" playlists, which now also includes "The A-List: Hip-Hop" changing to "Rap Life" in July and "The A-List: Dance" changing to "danceXL" in March. Other playlists still categorized as "The A-List" include genres like Pop, Country, R&B, Christian, Classical, Bollywood, African, K-Pop, Telugu, Khaleeji, Mandopop, J-Pop, Russian Hip-Hop, and more.

Each playlist showcases an image of the artist shot on an ‌iPhone‌ on their tour, and some artist's profile images have also been updated with similar Shot on ‌iPhone‌ iconography, including Lizzo and Kacey Musgraves. Apple has highlighted a few artists in a similar fashion with its "Shot on iPhone on Tour" video series, including artists like Florence Welch and FKA Twigs.

‌Apple Music‌ has continued to grow over the years, and in June the streaming music service was reported to have just over 60 million paid subscribers. Earlier this week Spotify reported on its own paid subscriber count, which broke 108 million globally in Q2 2019.

now i see it
all I see is
Control-Alt-Delete
Score: 14 Votes (Like | Disagree)

dumastudetto
I renamed my Hard Rock playlist earlier to Rock. I felt it was a more honest representation of the works contained within it.
Score: 5 Votes (Like | Disagree)

ocanalix
For independent artists and small labels having their songs added to Apple's "The A-List: Alternative" felt like an achievement – a meaningful chart/list of sorts. "ALT CNRL" honestly just sounds like some user-made playlist on Spotify. I'm feeling this change will have a negative effect on music press directing toward Apple Music. It's not a big deal, and it's super subtle, but honestly it makes a difference.
Score: 4 Votes (Like | Disagree)

Mactendo
It should be named OPTION CTRL
Score: 3 Votes (Like | Disagree)

alt key has existed on the Mac since .... (don't really know, but for a very long time)

They started being labeled in the 90's and wasn't always consistent on what devices included it, it was just to allow simplicity when users transition between MacOS and Windows. They did remove the labeling from the latest keyboards however.

Mainly the comment was a joke that they would be adding a new key that would perform like the ALT key does which would be nice to have.
Score: 2 Votes (Like | Disagree)

jona2125
Alt key coming to Mac 2020? Finally I can get MacOS to stop asking me "what key is this"
Score: 1 Votes (Like | Disagree)
Read All Comments