Friday July 12, 2019 6:35 am PDT by Joe Rossignol
iFixit has shared a teardown of the new entry-level 13-inch MacBook Pro, which was refreshed this week with Intel's latest 8th-generation processors, a True Tone display, Touch Bar, Touch ID, and the Apple T2 security chip.

The teardown reveals a larger battery with a 58.2 Wh capacity, which slightly exceeds the 54.5 Wh battery found in the previous-generation function key model. iFixit guesses this is how the 2019 model manages to power the Touch Bar, ‌Touch ID‌, and T2 chip while keeping the same 10-hour battery life.

To make room for the ‌Touch ID‌ sensor alongside the Touch Bar, iFixit notes that Apple appears to be using a slightly smaller heat sink. The speaker opposite the fan also looks to have been shrunk in size.

While the previous-generation entry-level 13-inch MacBook Pro had a modular SSD, storage is soldered down in the 2019 model. However, there are some newly modular components, including the Thunderbolt board and the speakers. This configuration is in line with other modern ‌MacBook Pro‌ designs.

As we confirmed earlier this week, the notebook has the same third-generation butterfly keyboard with updated material as the higher-end 2019 ‌MacBook Pro‌ models introduced in May, with Apple promising improved reliability. 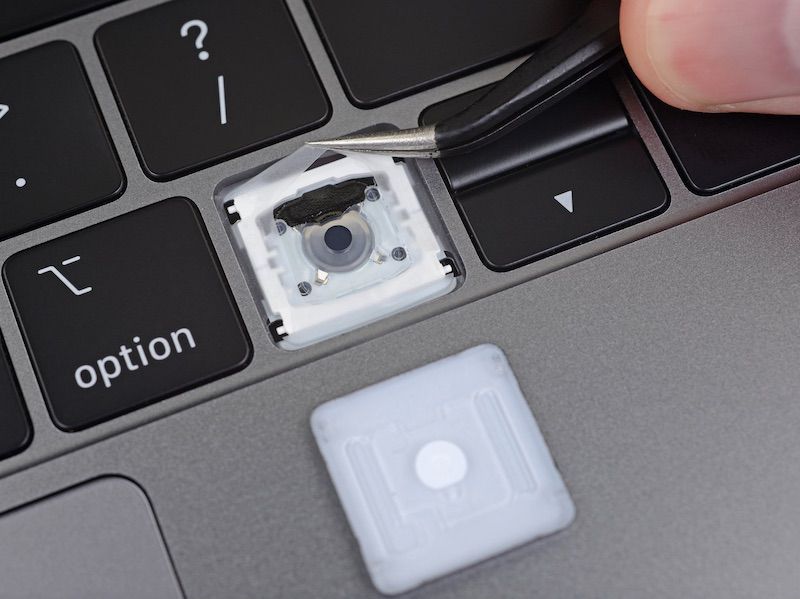 Like most other modern MacBooks, this model earned a low repairability score from iFixit due to the usual concerns, such as Apple's use of proprietary pentalobe screws, a glued-in battery, and soldered-down storage and RAM. One positive is that the trackpad can be replaced without touching the battery.

oldmacs
The soldered SSD is a step backwards :/
Rating: 94 Votes

MacFather
Not touching any of these until the scissor-switch keyboard is back. And for God's sake, ditch that pitifully small 128GB ssd, it's not 2011 anymore...
Rating: 79 Votes

satchmo
I can only hope for a return to laptops with sockets and screws.
One day...maybe when we have new leadership that truly believes in sustainability and the right to repair.
Rating: 59 Votes

The majority of "people" perhaps, but not the majority of businesses (especially enterprises). There's a reason why brands such as Latitudes and Thinkpads are so popular with enterprises and other large organizations: repair-ability. And soldiered parts don't necessarily made them more robust.


I can swap a dead lenovo keyboard in about 30 minutes and have a user back up and running. I can swap the SSD storage on any of our lenovo's in about 10 minutes if need be.

if a laptop dies and needs to go to warranty, I can yank the drive out, put it into another laptop and the user continues working while we repair the machine without any change to data or workflow.

replacement and fixes can be done at just about any repair centre and take usually 1-2 days tops.


this is regular required work in an enterprise. And we're only talking about a small 200-300 person financial institution.

If I had to tell the CEO that if her laptop had a hardware failure the only solution was to be without her data or computer for 1-2 weeks while we send it in for repair, heads would roll. Especially if those repairs cost more than 1/3rd of the cost of the device in the first place. (we can get replacement keyboards for our lenovo's for about $50)

These new round of Mac laptosp arne't bad laptops. But the way they've been designed is clearly consumer focused first and not enterprise and not intended for long term large scale enterprise use. The lack of any sort of repairability means the turn around time should something go wrong is extended with additional risks of data loss should there be a problem. (replacing the motherboard shouldn't require replacing and losing all data)
Rating: 45 Votes

racerhomie
The elitists over in Macrumors & other tech sites are hilarious. They never stop to amuse me. Only 1-3% of Mac owners in the mid 2000s ever touched the machines' insides. The data is collected independently with 1000s in sample size & is not from apple. Majority of people want machines to be more integrated, as this allows for machines to be less error prone & more robust.This goes for MacBooks as well. MacBook batteries last 3-4 times longer than 2009, their motherboards have gotten more efficient, and native SSD storage is much faster. I get it some elitist geeks want to touch the insides, and move things around, but that wont happen with Apple. Please make your own laptops or desktops or go to another brand.
Rating: 44 Votes

enoxon
I will never ever buy a computer with no upgrade-ability or repair-ability, even if it uses very good parts. Can't imagine what my life would have been like were I not able to upgrade - or repair - my 2011 mbp. But to each his own.
Rating: 28 Votes

kreasonos
With that keyboard? Dealbreaker, won’t be buying.
Rating: 28 Votes

If it doesn’t come in a burlap bag as a bunch of parts with no instructions, that I can put together myself... no buy!


Except, NOBODY is asking that.

your hyperbole in attempt to brush off legitimate concerns raised with these devices is noted.

We're not saying we want to be able to build our own MacBook Pro laptop. We're saying, in an enterprise environment there are serious repairability concerns that limit the reach Mac's can reach due to costly and timely repairs due to complete soldering of components with known lifespan limitations.

Hey, I would be more than happy if I NEVER ever have to replace another SSD or keyboard in my life. But the rreality is, these are two of the most common points of failure in just about every single device. Including Apple's computers.
Rating: 26 Votes