Earlier this week, Xiaomi revealed a new digital avatar feature called "Mimoji," and the parallels to Apple's own Memoji feature were abundantly evident. Although Xiaomi sent out a press release refuting claims that it copied Apple, the company is in hot water again today for going so far as to use Apple's own ads on its website to promote Mimoji (via CX Live and Daring Fireball). 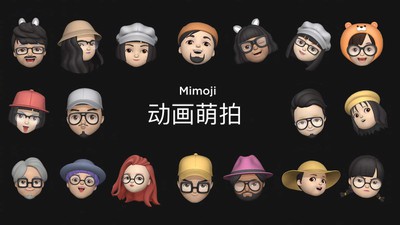 According to Xiaomi's public relations general manager, Xu Jieyun, this was all an accident. Xiaomi staff "uploaded the wrong content" to the sites, Xu Jieyun said on Weibo.

Both Memoji and Mimoji are 3D avatars that the user can customize to make them look as similar - or dissimilar - to their own likeness as possible. Xiaomi's version includes similar art style to Apple's Memoji, as well as accessories and eyewear that all look just like Memoji.

Xiaomi has made a name for itself when it comes to copying Apple products and features. It launched the equivalent of Apple's Animojis on the Mi 8 smartphone in 2018; a device that strongly resembled the iPhone X. Earlier in 2019, it released a device that looked and functioned similarly to AirPods.

How do you spell stupid in Chinese?

DcXiao
As a Chinese, I'm really embarrassed by all these Mimoji things...
Score: 30 Votes (Like | Disagree)

macduke
Stop saying "allegedly". This is absolute proof that they copy Apple, full stop, end of story. There is nothing "alleged" about this.
Score: 26 Votes (Like | Disagree)

1144557
How does one "accidentally" have a downloaded copy of the commercial to accidentally upload it? All kinds of caught with hand in the cookie jar.

This is why every time I see an appealing Chinese phone I feel better about Apple as these Chinese companies go and do something shady and scammy like this; not even the Memoji ripoff part.
Score: 22 Votes (Like | Disagree)

Friday July 30, 2021 9:04 am PDT by Sami Fathi
Tesla CEO Elon Musk reportedly once demanded that he be made Apple CEO in a brief discussion of a potential acquisition with Apple's current CEO, Tim Cook. The claim comes in a new book titled "Power Play: Tesla, Elon Musk and the Bet of the Century," as reviewed by The Los Angeles Times. According to the book, during a 2016 phone call between Musk and Cook that touched on the possibility of ...
Read Full Article • 233 comments