Chinese company Xiaomi is gearing up to launch a new smartphone, the CC9, and along with it the company has introduced what it's calling "Mimoji" (via Engadget). Unsurprisingly given their name, these 3D avatars appear and function very similar to Apple's Memoji, letting users create and design their own torso-less characters and send them through texts. 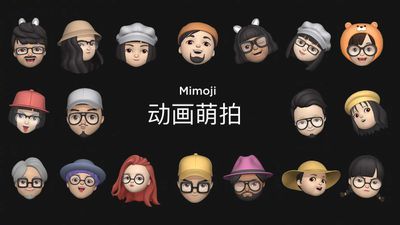 Xiaomi's Mimoji via Xiaomi/Engadget
Xiaomi's avatars bear a striking resemblance to the avatars and customization options offered by Apple, down to similar hats and art styles. On iPhone, users can create and customize their Memoji, and then send them as videos or stickers in Messages, and it appears that Xiaomi's Mimoji will act in a similar fashion.

Of course, the idea of personalized 3D avatars has been around for a while, with companies like Samsung and Microsoft letting users create digital versions of themselves to use on smartphones, consoles, and elsewhere. With Xiaomi's decision to name its version of this idea Mimoji, however, the inspiration appears to be derived mostly from Apple.

Apple's Memoji
This isn't the first time that Xiaomi copied an emoji-related idea from Apple, as the company launched the equivalent of Apple's Animojis on its Mi 8 smartphone last year. This device also strongly resembled the ‌iPhone‌ X design, with its own notch and vertical dual-lens camera. There was also an AirPods clone released by Xiaomi earlier in 2019.

Xiaomi's CC9 smartphone will go on sale in China on July 5.

Update: In a Xiaomi press release, translated by Twitter user @e_l_l_l, the company refutes claims that Mimoji is a clone of Apple's Memoji: "We have conducted internal audits and found no evidences that our Mimoji characters have [been] plagiarized from any of our competitors including Apple."

jmh600cbr
They’re not even trying to hide it anymore
Score: 32 Votes (Like | Disagree)

KazKam
I think you spelled the company's name wrong, it's Xerox.
Score: 31 Votes (Like | Disagree)

DblHelix
Why does China think it is ok to copy? Is it because they are incapable of original thought with the amount of rote memorization they force on students?
Score: 30 Votes (Like | Disagree)

alpi123
Wtf? Seriously, if I didn't read the title, I would've assumed these are new Memojis.

SDJim
I'm going to make a smartphone called the EyePhone and see how far I can get.

I mean, they also called it derivative in the same breath.