Apple and enterprise company Jamf recently teamed up to take a look at the drivers behind Mac adoption in the enterprise and the impact of device choice programs for employees on attracting talent.

For the survey, 1,285 employees from various-sized companies across the world were asked a series of questions about Macs in the workplace, with the results suggesting high levels of employee satisfaction from Mac users. 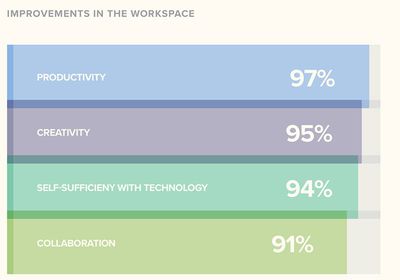 97 percent of survey respondents said that using a Mac increased their productivity, while 95 percent said their creativity levels were up. 94 percent said they were more self-sufficient, and 91 percent said collaboration was up.

According to the survey, 79 percent of respondents said that they would not be able to do their jobs as effectively without a Mac.

On the topic of self-sufficiency, 40 percent of respondents had no issues with their Mac over the course of the last 12 months, and 70 percent experienced two or fewer issues. Of those who did have issues, the leading problem was related to the network, rather than the device itself. 74% who previously used a PC said they have fewer issues now that they use a Mac.

When asked why they chose a Mac over a PC, most respondents cited a preference for Apple products, the ease of use and reliability of the Mac, and integration with the necessary apps needed for work. Design, familiarity, collaboration, and continuity between Mac, iPhone, and iPad were also cited as reasons.

97 percent of workers who have a choice of which device to use said it's important to their organization that an employee choice program exists. When asked why, employees cited productivity, creativity, and feeling valued by their employer as the top three reasons. 94 percent of all respondents said they're more likely to choose or stay with a company that offers a choice between Mac and PC.

Jamf's full survey results are available in an eBook downloadable from the Jamf website.

dmylrea
Could this survey have been more biased and vague? They asked only Mac users, not Windows users also?

And those who prefer Macs over PC's...when was the last time they used a Windows PC? Windows 7 or 10? The old hard drive days (slow PC) or with SSD (fast PC)? If I hadn't used a PC for 5 years and am using a fast current Mac with SSD, I'd hate PC's too!

Again, this article is so much fluff.
Score: 18 Votes (Like | Disagree)

fourthtunz
I find the Mac to be a better environment for me!
Score: 13 Votes (Like | Disagree)

I do think the future of the enterprise is iPad, not Mac.

robinp
some of those graphs are very pretty but terrible for communicating data
Score: 11 Votes (Like | Disagree)

B4U
Engineering with a Mac?
Really?
I had to buy a refurbished Windows laptop just to get through the EMC class for the graduate course. :eek:
Score: 8 Votes (Like | Disagree)
Read All Comments

Monday June 27, 2022 1:57 pm PDT by Juli Clover
Benchmark testing has indicated that the 256GB variant of the 13-inch MacBook Pro with M2 chip offers slower SSD performance than its M1 equivalent, and now real-world stress testing by YouTuber Max Yuryev of Max Tech suggests that the 256GB SSD in the 13-inch MacBook Pro is also underperforming in day-to day-usage. The M2 MacBook Pro with 256GB SSD and 8GB RAM was slower than the M1 MacBook ...
Read Full Article • 324 comments