At WWDC 2018, Apple introduced a redesigned Mac App Store alongside changes to sandboxing parameters on macOS Mojave. Since then, several well-known apps have launched on or returned to the ‌Mac App Store‌, including the Microsoft Office suite, Microsoft To-Do, BBEdit, Transmit, and others. 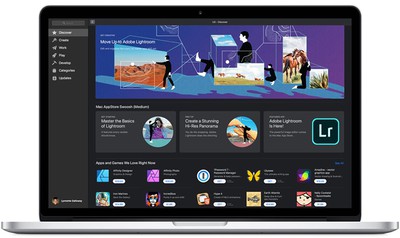 Next up is Adobe Lightroom CC, which is available on the Mac App Store as of today. The professional photo editing software is free to download, but requires a $9.99 monthly subscription via Apple's in-app purchase system after a one-week trial. 1TB of cloud storage is included with a subscription.

As noted by The Verge, Lightroom was previously available on the ‌Mac App Store‌ for a one-time purchase of $149.99 in 2012:

This isn't the first time that you've been able to get Lightroom in the ‌Mac App Store‌. Back in 2012, when Adobe sold its apps as standalone purchases before starting to push Creative Cloud subscriptions, Lightroom 4 was available for $149.99. Lightroom 5 never came to Apple's store, however, and even Adobe itself doesn't sell standalone versions of Lightroom today.

This news is a win-win for Apple and Adobe. Apple has landed another major app on the ‌Mac App Store‌, which faced years of criticism, and will generate revenue from its split of in-app purchases. Adobe, meanwhile, has made Lightroom available to a very broad audience of potential customers.

Lightroom CC remains available outside of the Mac App Store as well, with subscription pricing starting at the same $9.99 per month. One benefit of switching to the ‌Mac App Store‌ version is a more streamlined update process.

If they ever sold the newer version as stand alone, I would consider it.
Score: 28 Votes (Like | Disagree)

ipedro
I’m switching to this model. I’d rather have updates come through the Mac App Store than through some adobe applet that’s always running in the background 24/7, doing god knows what.
Score: 22 Votes (Like | Disagree)

Greenmeenie
I much prefer affinity photo for my ipad pro. One time $20 purchase. Such a fantastic program.
Score: 11 Votes (Like | Disagree)

aaronhead14
Adobe really needs to provide a non-subscription based version of their software. People are fed up with this subscription nonsense.
Score: 10 Votes (Like | Disagree)

If they ever sold the newer version as stand alone, I would consider it.

macduke
Don't get too excited, folks. This is just Lightroom CC—not the real deal. Not Lightroom Classic.
Score: 7 Votes (Like | Disagree)
Read All Comments