Last June at WWDC, Apple revealed that Microsoft Office and its suite of apps would finally be launching on the Mac App Store, without giving a specific launch date. That launch now appears imminent as iOS App Stores in select countries have updated with a new feature referencing the availability of Microsoft Office on the ‌Mac App Store‌. 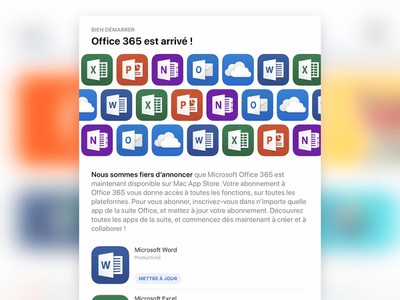 Image via @agpiveteau
Specifically, in Switzerland and France, the iOS App Store has a feature that states the following:


We are proud to announce that Microsoft Office 365 is now on the ‌Mac App Store‌. Your subscription to Office 365 gives you access to all functions on all platforms. To subscribe, sign up for any Office Suite app and update your subscription. Discover all the apps in the suite, and start creating and collaborating!

Microsoft Office apps have been available on Mac for years, but users have had to download them from the web or in physical retail boxes since Apple has never offered them directly in its ‌Mac App Store‌. This should make the process of getting programs like Microsoft Word, PowerPoint, and Excel much easier for Mac owners.

Like other versions of Office, you'll need a subscription to Office 365 to gain access to the full features of each app.

Although the launch appears to be very soon, we're still unsure on when exactly Microsoft Office will be ready to download in the ‌Mac App Store‌. When it is, we'll update this post accordingly.

Update 2: Apple has published a press release about the launch of Microsoft Office on the ‌Mac App Store‌. The company notes that Office 365 for Mac has been designed to support Mac-unique features, like Dark Mode, Continuity Camera, and Touch Bar on MacBook Pro.

“We are excited to welcome Microsoft Office 365 to the all new ‌Mac App Store‌ in macOS Mojave,” said Phil Schiller, Apple’s senior vice president of Worldwide Marketing. “Apple and Microsoft have worked together to bring great Office productivity to Mac users from the very beginning. Now, with Office 365 on the ‌Mac App Store‌, it's easier than ever to get the latest and best version of Office 365 for Mac, iPad and iPhone.”

You can also download a bundle of all the new Office 365 apps on the ‌Mac App Store‌, including OneDrive and OneNote.

I thought Apple fired everyone from Q/A already?
Score: 18 Votes (Like | Disagree)

Ah, yes... because putting the only good suite Microsoft has onto a Mac is heathenous behaviour, right? Get a grip.

Are we both joking or is it just me? I was hinting that MS Office is already available on the Mac, therefore I don't understand why they would put it on the App Store. Either way, I'll still use it on my Mac every day. Cheers!
Score: 12 Votes (Like | Disagree)

martyjmclean
I have little incentive to upgrade from Office 2016 and it certainly won’t be to a subscription. If it was offered outright on the App Store I’d do that when the time comes.
Score: 10 Votes (Like | Disagree)

vladobizik
I'm very excited. I prefer to have as many apps as possible from the Mac App Store, update them at the very same place and not worry about license terms, etc. So I'll be swapping my regular install of Office 365 for the App Store apps.
Score: 10 Votes (Like | Disagree)
Read All Comments