Bare Bones Software today announced the return of BBEdit to the Mac App Store after a nearly five year hiatus. 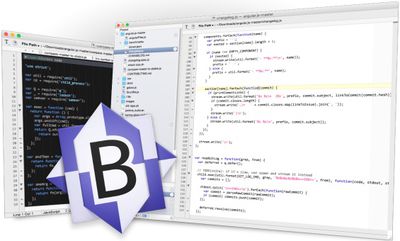 The popular text, code, and markup editor is a free download on the Mac App Store with full features available for $3.99 per month or $39.99 per year via in-app purchase. BBEdit remains available on a perpetual license basis for $49.99 via Bare Bones Software's online store and at participating resellers.

BBEdit was updated in February to become a sandboxed app, a requirement to be distributed through the ‌Mac App Store‌. Sandboxing limits apps to their intended use and is a protection implemented to prevent malicious software from working. BBEdit will require explicit permission to access files and folders on the Mac.

Bare Bones says BBEdit's features and capabilities are identical for all customers, whether downloaded directly from the Bare Bones Software web site or from the ‌Mac App Store‌, and whether using a subscription or a perpetual license.

BBEdit offers a 30-day evaluation period, during which its full feature set is available. After the evaluation period has expired, you can continue to use BBEdit in "free mode" with permanent access to editing capabilities, but not web authoring tools or other exclusive features for paying customers.

BBEdit 12 features more than 300 new features and refinements since the last ‌Mac App Store‌ release of the software, including 64-bit support, macOS Mojave and Dark Mode support, Git integration, and much more.

BBEdit is just one of several well-known apps returning to the ‌Mac App Store‌ following its redesign and changes to sandboxing rules on macOS Mojave. Others include the Microsoft Office suite, Panic's file transfer app Transmit, and Adobe Lightroom CC, as revealed by Apple during its WWDC 2018 keynote.

DocMultimedia
I've been using this forever. A truly powerful tool for dealing with text.
Score: 9 Votes (Like | Disagree)

nutmac
BBEdit is updated every 3 years (BBEdit 13 should be released fall 2020).

Solomani
BBEdit is a "classic" 3rd party Mac software from the Golden Age of Macintosh….. just like Eudora (which was made by QualComm :p).
Score: 7 Votes (Like | Disagree)

I hate all recurring payments period!

My rule of thumb before I sign up to any service is I religiously search for a one time fee alternative or just don’t sign up if I don’t absolutely need it.

[I]Bare Bones says BBEdit's features and capabilities are identical for all customers, whether downloaded directly from the Bare Bones Software web site or from the Mac App Store, and whether using a subscription or a perpetual license.[/I]

The Mac store offers a subscription model and the non-Mac store download offers a license.
Score: 7 Votes (Like | Disagree)

BBEdit is a "classic" 3rd party Mac software from the Golden Age of Macintosh….. just like Eudora (which was made by QualComm :p).

The Bare Bones t-shirt from years and years ago has held up great too. :)

My rule of thumb before I sign up to any service is I religiously search for a one time fee alternative or just don’t sign up if I don’t absolutely need it.
Score: 5 Votes (Like | Disagree)
Read All Comments