Huawei today confirmed it is delaying the launch of its Mate X foldable smartphone from June to September for quality assurance purposes. 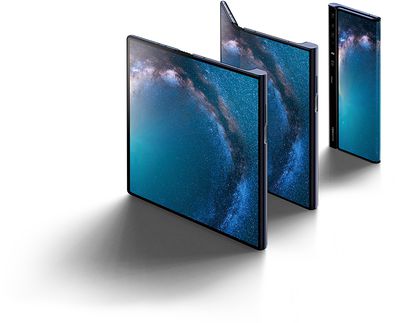 Huawei's Mate X
A spokesperson for Huawei said the Chinese smartphone maker is being more "cautious" after some reviewers experienced embarrassing display issues with Samsung's foldable smartphone, the Galaxy Fold. "We don't want to launch a product to destroy our reputation," the spokesperson told CNBC.

Samsung delayed the launch of the Galaxy Fold back in April and plans to announce a new release date "in the coming weeks," according to CNET.

Last month, the Trump administration added Huawei to a trade blacklist over alleged national security concerns, effectively forbidding U.S. companies from doing business with the Chinese smartphone and telecom giant, but a Huawei executive said that supply chain issues are not behind the delay.

Huawei is instead postponing sales of the Mate X in part to improve the quality of the device's folding screen, said Vincent Peng, a senior vice president at Huawei, on the sidelines of a Wall Street Journal tech conference in Hong Kong.

Adhering to the ban, Google parent company Alphabet previously said it will no longer license Android to Huawei for its smartphones after a 90-day reprieve granted by the U.S. government expires in August. In this event, Peng said Huawei could have its own Hongmeng operating system ready by early next year.

"Our preference will of course be Google and Android as we have been partners for many years," said Peng, according to Reuters. "But if the circumstances force us to, we can roll out Hongmeng in six to nine months."

It is unclear if Apple will ever release a folding iPhone, but it has certainly explored the idea in patents. The technology is not cheap, with Huawei's Mate X expected to start at $2,600 in the United States, and clearly is not without its issues either as evidenced by Huawei's and Samsung's struggles.

mattster16
I remember months ago when I was saying these looked like crap and the quality and technology wasn’t there yet and I was getting told I was an Apple “fanboy”. Sure is looking like I and those who shared that view were right.
Score: 60 Votes (Like | Disagree)

"We don't want to launch a product to destroy our reputation"

AngerDanger
Waiting to bring reliable tech to market > rushing to prove that you're more innovative than Apple.
Score: 40 Votes (Like | Disagree)

ryanwarsaw
They had better give me double the normal social merit credits for buying this.
Score: 25 Votes (Like | Disagree)

Abazigal
Why would you need to be more cautious after the Galaxy Fold incident? Didn't your company do any QC of their own?
Score: 22 Votes (Like | Disagree)

dlewis23
Thought this would eventually happen after what happened with Samsung and it seeming like the Galaxy Fold won't be launching anytime soon.
Score: 12 Votes (Like | Disagree)
Read All Comments