Apple yesterday unveiled iOS 13, the newest version of the operating system designed to run on the iPhone (and the iPad, though the ‌iPad‌ version has been renamed to iPadOS). iOS 13 is an update that introduces a long list of new features and some changes that are quite exciting.

Check out the video below, where we walk through all of the major features that you can expect to see when you upgrade to iOS 13 this fall.

Subscribe to the MacRumors YouTube channel for more videos.
First and foremost, iOS 13, like iOS 12, is an update that brings some much needed under-the-hood performance improvements. Apple has reduced app download sizes by up to 50 percent, leading to improved app update times, and apps launch up to twice as fast. On devices that use Face ID, unlocking with ‌Face ID‌ is 30 percent faster than before.

iOS 13 looks a lot like iOS 12 when it comes to design, with the exception of a new systemwide Dark Mode that turns the entire OS, apps included, dark. ‌Dark Mode‌ can be toggled on at will or set to activate on a schedule.

Many apps got updates, but Photos is the app that got the most significant overhaul. There's a new main view that organizes and curates your ‌Photos‌ library to show you a selection of highlights by day, month, or year. It's a neat way to get a look back at your favorite memories, and you'll notice that videos in this view autoplay.

The image editing interface in ‌Photos‌ has been overhauled to make it easier to make quick tweaks to your images, and there are new Portrait Lighting adjustments for moving the light closer or further away depending on the look you're going for.

The volume HUD has been overhauled and the new volume up/down indicator is less obtrusive, located either at the side of the ‌iPhone‌ or the top depending on the orientation of your device.

Right now, iOS 13 is limited to developers, and Apple warns those who aren't risk takers to wait for the public beta, coming in July, before installing the update. It is indeed riddled with bugs right now and does not offer the best usage experience. It's best to install it on a secondary device.

A new Find My app combines ‌Find My‌ ‌iPhone‌ and ‌Find My‌ Friends, and it is equipped with one of the best new features Apple announced - an option to track your devices even when they're offline by leveraging other nearby iOS devices.

A new Sign In with Apple feature is also a major privacy-protecting change, offering up a convenient way to sign into apps and websites. Your Apple ID authenticates your account with Touch ID or ‌Face ID‌, and apps are even able to generate single-use randomized email addresses so developers and companies never get your real info.

Apple made the Reminders app more useful in iOS 13 with a total revamp, and Messages has a new Profile feature for sharing your name and photo with people. There are a ton of new Memoji customization options, and three new Animoji: a cow, octopus, and mouse. Animoji/Memoji stickers have been added so you can use your Memoji in Messages, Mail, and other apps.

Siri has a new voice, but it doesn't seem super different, and there are updates to CarPlay, AirPods, HomePod, and more. ‌CarPlay‌ has a new interface, ‌HomePod‌ supports Handoff so you can transfer music from an iOS device to the ‌HomePod‌, and with AirPods, you can connect two to a single ‌iPhone‌ to share what you're listening to with a friend.

HomeKit is coming to routers in iOS 13, plus there's a neat new Secure Video feature that makes sure video recorded is analyzed right on your device and then sent in an encrypted stream to iCloud, so you can be sure no one is spying on your in-home cameras.

A new swipe-based QuickPath keyboard option has been added, and Apple made it easier to edit text with scrolling improvements and smoother cursor movement.

The Health app has a new feature for monitoring hearing health, and there's a new Cycle Tracking option for tracking menstrual cycles. There are also tons of iPad-specific changes, but we'll go over those in a separate iPadOS video coming later this week, now that iOS and iPadOS are somewhat separate operating systems.

Following months of beta testing to work out bugs and refine features, iOS 13 will launch in the fall alongside new iPhones. Make sure to stay tuned to MacRumors because we're going to delve further into iOS later this week, along with Apple's other operating systems for Mac, Apple TV, Apple Watch, and ‌iPad‌.

ipedro
Fantastic update. iOS has gotten a lot of polish after the iOS 7 reboot. Apple has been adding more depth with shadows and isn’t afraid to get into a little skeuomorphism like the annotation palette shows.

I love what they’re doing with Memoji. I’ve long called for Animoji and Memoji to replace the ever growing litter of emojis. One Memoji reflecting your actual reaction can do the job of a dozen emojis. Turning your Memoji into stickers is brilliant.

Maps has gotten to a point in Toronto where I prefer its directions to Google Maps which I’ve now deleted entirely. While I prefer Flyover for getting around a city, I would go back to Google Maps for the occasional street view. Apple’s 3D implementation is far superior. Can we say that Apple has now surpassed Google Maps? Probably not everywhere but in some cities, the answer is an absolute yes. Steve Jobs’ play has paid off in spades. Apple built their own UI unrestricted from the constraints of a third party, they get to keep users’ data private and get their own anonymous data. Well done.

As a photographer who used Aperture religiously, I could see Apple’s play in rebooting a flawed foundation and starting brand new with Photos. That too is beginning to pay off. The editing tools in Photos is so versatile that a beginner can understand it and a professional can find what they need. Photos plugins make it possible to expand tools for pros. Unlike Aperture, Photos works across all Apple platforms on iOS and Mac. What’s still missing is a better organization and sorting system and it’ll have caught up to Aperture and can grow from there. Again, well done.

Sign In with Apple is another brilliant play. It leverages Face ID to start to eliminate passwords entirely. It’s another one of those Apple things that benefits both the user by its convenience and Apple in that it keeps you stuck (voluntarily) in Apple’s ecosystem. Try leaving Apple after having dozens of signs ins around the web. It’s the same reason why so many people are stuck (involuntarily) on Facebook.
Score: 27 Votes (Like | Disagree)

JPack
Optimized battery charging
A new option helps slow the rate of battery aging by reducing the time your iPhone spends fully charged. iPhone learns from your daily charging routine so it can wait to finish charging past 80% until you need to use it.


It's finally here. A simple but effective way to reduce battery aging.
Score: 21 Votes (Like | Disagree)

pike908
When is Apple Maps gonna add bike maps??? This is the primary reason I use Google Maps.
Score: 10 Votes (Like | Disagree) 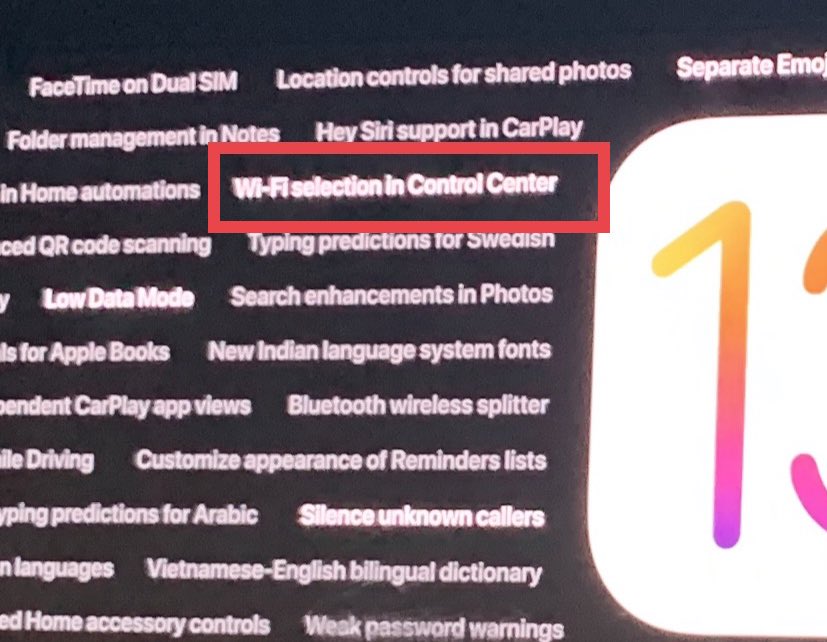 Overall....underwhelming....especially since last year was mostly bug fixes, and the excuse this year was supposed to be major, radical upgrades.

Then I would say you have low expectations, because I think iOS 13 seems to be fairly receipted for the overall changes they’re bringing to the iPad and iPhone. Yes, iOS 12 was about performance sustainability, but iOS 13 really does highlight/polish what needed to be, and that Keynote was _loaded_ with changes/alterations/additions.
Score: 7 Votes (Like | Disagree)

just curious what is the difference between bike directions and walking directions?

In some countries you have dedicated bike lanes that
- don’t always follow the road, or the fastest direct line
- don’t have stairs
- don’t allow pedestrians