Apple today previewed iOS 13, which will introduce a new Dark Mode to iOS devices and several performance improvements across the board, including faster Face ID, slimmer downloads and updates, and quicker app launches. 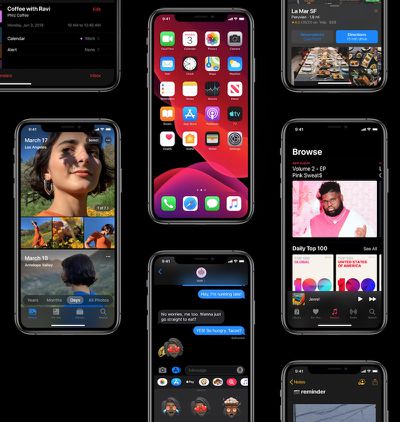 ‌Dark Mode‌ has been implemented across the iPhone and iPad operating system and its native apps, including the appearance of notifications, widgets, calendar, and notes. ‌Dark Mode‌ is also available to third-party app developers for integration into their own apps, and can be scheduled to turn on automatically at sunset or at a certain time.

Apple has also added a swipe to type feature to the stock iOS keyboard called QuickPath, which brings easy one-hand typing to the iOS keyboard by continuously swiping through the letters of a word, and Memoji are automatically made into sticker packs built into the iOS keyboard, so they can be used in Messages, Mail and other apps.

iOS 13 will also bring new sharing suggestions for Messages – users can automatically share a user's name and photo, or customized Memoji or Animoji, to easily identify who is in the Messages thread.

A new sign-in feature allows users to log in to third-party apps with their Apple ID, Notes has a new Gallery View, more powerful collaboration with shared folders, new search tools and checklist options, and time-synced lyrics are coming to the Music app.

Elsewhere, Siri has a new, more natural voice, and ‌Siri‌ Shortcuts now supports Suggested Automations that provide personalized routines for things like heading to work or going to the gym. And with AirPods, ‌Siri‌ can read incoming messages as soon as they arrive, from Messages or any SiriKit-enabled messaging app.

In addition, the Files app is gaining the ability to share folders with iCloud Drive and access files from external storage devices like SD cards and USB flash drives, while new Location Services options include a new one-time location option and more information on when apps are using location in the background.


"iOS 13 brings new capabilities to the apps you use every day, with rich updates to Photos and Maps, and privacy-protecting features like Sign In with Apple, all while delivering faster performance," said Craig Federighi, Apple's senior vice president of Software Engineering. "We're excited for customers to experience what's coming to iPhone this fall and can’t wait for them to see how great everything looks in Dark Mode."

Developer betas of iOS 13 are already available, while the final public version will be released this fall.

Mick-Mac
All I want in the 21st century is an iPhone keyboard with an added number row across the top. ALL iOS devices have enough room to support that and I'm just so sick and tired of bouncing back and forth between alpha and numeric keyboards just to enter addresses and dates and passwords etc. It just kills me that this isn't available. Screw swiping until this happens...
Score: 22 Votes (Like | Disagree)

adnbek
And calls that still take over the screen no matter what...

Come on Apple, you can fix this!

Imagine shooting a very important video and a call comes in. Boom! Your recording is interrupted. Awesome.
Score: 12 Votes (Like | Disagree)

douglasb7
Have we seen all that will be delivered to the new iOS? Dark Mode is needed. But really, customizable is really lacking. This new iOS is NOT progressive or intuitive. Apple is lacking truly innovative software. This is not a .dot update... this was supposed to be huge. Very soft landing. Almost boring.
Score: 8 Votes (Like | Disagree)

Not sure what you mean by non intrusive phone calls, but there is a new feature that sends unrecognized numbers to voice mail. I've been using Do Not Disturb for this, but this is better because it only affects calls. And there is a new volume control. Take some time to look at Apple's iOS 13 preview page ('https://www.apple.com/ios/ios-13-preview/features/') and you might find other features they didn't have time to announce.

You’ve never gotten a call you didn’t want to answer and didn’t want to send to voicemail so you are locked on the call until it ends? Happens to me all the time. I know this isn’t just me that wants this feature.
Score: 6 Votes (Like | Disagree)

What is the big deal about dark mode? Is it an aesthetic thing?

Easier on the eyes and saves battery.
Score: 6 Votes (Like | Disagree)
Read All Comments