Over a dozen parental control app developers have come together with a shared message for Apple: it's "time to put kids first." 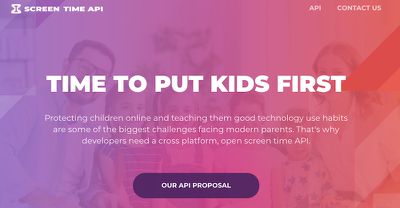 Together, they have launched a new website called Screen Time API that urges Apple to release a public API granting developers access to the same functionalities that iOS 12's Screen Time feature uses. The developers have even proposed their own API, complete with samples of code and a diagram of how it would work.

"Protecting children online and teaching them good technology use habits are some of the biggest challenges facing modern parents," the developers plea. "That's why developers need a cross platform, open screen time API."

The developers were encouraged to act by Tony Fadell, a former Apple executive known as the "Father of the iPod." Fadell backed the developers in a series of tweets, and according to The New York Times, he also said he would help "push" their message "out to the world," adding "just make sure it's done BEFORE WWDC."

The campaign comes a month after The New York Times reported that Apple had removed or restricted many of the most popular screen time and parental control apps on the App Store since launching its own Screen Time feature in iOS 12 last year, raising concerns over potentially anticompetitive behavior.


Apple was quick to respond, stating that it became aware over the last year that some parental control apps were using a technology called Mobile Device Management or "MDM" that puts users' privacy and security at risk.

"Contrary to what The New York Times reported over the weekend, this isn't a matter of competition," wrote Apple. "It's a matter of security."

MDM technology is intended for enterprise users to manage their company-owned devices, and Apple says the use of MDM by consumer-focused apps carries privacy and security concerns that resulted in Apple addressing the situation in its ‌App Store‌ review guidelines in mid-2017.

Apple added that when it found out about these ‌App Store‌ guideline violations, it communicated with the necessary developers, giving them 30 days to submit an updated app to avoid being removed from the ‌App Store‌.

Many developers quickly refuted parts of Apple's press release, with OurPact claiming that its parental control app for children was removed from the ‌App Store‌ on October 6, 2018 without any prior communication from Apple, just three weeks after iOS 12 was publicly released with Screen Time.

Three other developers added that Apple was slow to respond and did not provide any resolution for the sudden guideline violations.

Apple has yet to indicate whether it will release a public API for Screen Time. While it is certainly possible that Apple could announce that it will offer such an API at its WWDC 2019 keynote next week, on short notice, no rumors have indicated that the API is coming in the initial release of iOS 13.

danuff
Speaking from a developer point of view, why should WE be responsible for the length of time that a kid (or anyone) spends time in one of our apps? Apple has made an app for parents to control the amount of time that a device has to be a babysitter for their kid. It should be the parent's responsibility to learn that app and set limits for THEIR child, or did I read this article wrong?
Score: 13 Votes (Like | Disagree)

realtuner
Ah, yes. Time to pull at the heart strings and make this about the kids.

Just like government wants to use terrorists as an excuse to require Apple to make a way for them to monitor encrypted messages.

Speaking from a developer point of view, why should WE be responsible for the length of time that a kid (or anyone) spends time in one of our apps? Apple has made an app for parents to control the amount of time that a device has to be a babysitter for their kid. It should be the parent's responsibility to learn that app and set limits for THEIR child, or did I read this article wrong?

Because some developers want to make money by offering a service similar to what Apple already offers for free. And they expect Apple to modify iOS so they can do so.
Score: 9 Votes (Like | Disagree)

ocyrus
I don't get it.

They want to be able to control the system with an app that the parents install?

Theres no way Apple lets apps control the whole system like that. It's a hack waiting to happen.

It would be better for Apple to release better parental controls.

Or you know, don't buy your 13 year old an iPhone/iPod? Just a thought.
Score: 7 Votes (Like | Disagree)

[AUT] Thomas
Parental control tools are the best way to teach kids how to bypass censorship, so they learn about VPN, proxies, remotedesktops,...

nostaws
Have you used screentime? You can do what you’ve described. You can make your kids iPhone into a phone and nothing else.

I keep my kids phone and iMessage on all the time. And limit access to other apps. I have multiple kids and depending on the age appropriateness of screen-time hours and social media my kids graduate to more access and services.

I’m actually quite happy with screen time. My biggest complaint is the layout of the parental side. It’s clunky. I’d personally like to see it in its own polished stand alone app. It is hard for me to recommend to a non techie person.

I’m pretty pro developer. I don’t have a problem with Apple keeping this one close to home.

I would like to see a master switch that would disable EVERYTHING except for telephone. No texting, no calculator, no camera, no location, basically make it a simple telephone and that's it. Guarded behind a special password that doesn't relate to anything else in the phone. Hook it into a timer function, so that it can go into lockdown at a scheduled time and place.

I don't want to pick apart the phone and find this and that. Let's lay it out like my electrical panel in the house. A big fat master switch, followed by individual settings.

If you wanted to make it sexy, force a voice pattern detection instead from one of the parents to compare against a pre-recorded message.

As a parent, I know that the world is different than when I grew up. Go to a shopping mall, and show me the pay phones. If you want to come to my high school, I can show you where the pay phones once were, and are now gone. Not all homes have land lines anymore, either, and using someone's cell phone is somewhat personal.

It makes financial sense for parents to pass down their older iPhones to the next generation.

Manchesterca
Let's be clear here, this isn't an altruistic campaign, these are specific apps that want root level control of an operating system to monitor everything.

The fact that they backdoored a system to jerry-rig this to work in their apps in the first place, doesn't help their case.
Score: 3 Votes (Like | Disagree)
Read All Comments