While the highlight of last week's iOS 12.3 release was a revamped TV app with a new "Channels" feature, the release notes also mentioned a minor change to the Apple News+ interface that did not receive as much attention. 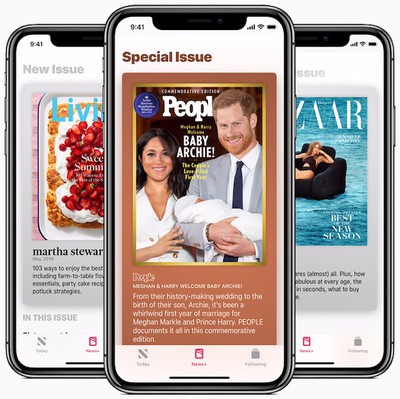 Ensuring the feature gains some awareness, Apple in a press release today highlighted the ability for ‌Apple News‌+ subscribers to follow publications directly from the ‌Apple News‌+ catalog view in iOS 12.3 and macOS 10.14.5. New issues from followed titles are automatically downloaded and available offline.

Apple added that it has received "a lot of great feedback from hundreds of publishers" available in ‌Apple News‌+, with quotes featured from editors of publications such as Vox, People, Harper's Bazaar, and Popular Science.

We've heard a lot of great feedback from the hundreds of publishers available in ‌Apple News‌+. The latest updates to ‌Apple News‌+ aim to best showcase their incredible journalism and put the most trusted news sources at readers' fingertips. ‌Apple News‌+ customers are very engaged readers, with most visiting the News app daily. Hundreds of people at Apple, across editorial, engineering, marketing and design teams, are working to make ‌Apple News‌+ the best experience for people who love reading their favorite titles and discovering new stories.

The feedback from editors can be read on the Apple Newsroom.

The Phazer
"Lot of great feedback" = "The product we shipped was a total dog."
Score: 8 Votes (Like | Disagree)

calstanford
So great that no one I know uses it
Score: 8 Votes (Like | Disagree)

WannaGoMac
Here's my feedback, please stop putting the News Plus articles all over my news feed. I have no interest in subscribing and these ads are very annoying.

Smoothie
When I canceled my free trial, I expected to see a feedback option to provide my reason. But nope.
Score: 4 Votes (Like | Disagree)

BootsWalking
I showed my great feedback...by cancelling my News+ subscription after the free, 30-day trial. App needs a lot of work.
Score: 3 Votes (Like | Disagree)

now i see it
I have no opinion and can't think for myself and have no preferences so if they like it then I will too
Score: 3 Votes (Like | Disagree)
Read All Comments