Rubén Caballero, a hardware engineering executive at Apple who worked with suppliers on modem hardware, recently left the company, reports The Information.

Caballero's departure comes just after Apple settled its lawsuit with Qualcomm and inked a deal that will see Qualcomm supplying chips for future Apple devices, including the 5G chips Apple will need for its 2020 iPhones. 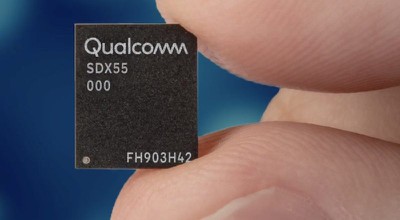 Caballero joined Apple back in 2005, and his name has been included on hundreds of Apple patents related to wireless technologies. Caballero is a well-known part of Apple's antenna engineering group, gaining public recognition following the "Antennagate" situation that impacted the iPhone 4.

A person familiar with Caballero's work at Apple told The Information that he had been responsible for "leading Apple's charge into 5G." Caballero's email address is no longer valid, his phone number is no longer active, and he does not appear in Apple's internal directory.

There is no word on why Caballero left the company, but Apple has been restructuring some of its chip teams. Apple's modem engineering efforts were put under chipmaking chief Johny Srouji back in February. Caballero and Apple both declined to comment on his departure.

Apple is planning to release its first 5G iPhone in 2020 and while the launch of the device is still more than a year away, Apple is already working on the future ‌iPhone‌ and ironing out technical details.

Apple will use Qualcomm chips for its first 5G iPhones, and may also be planning to source some chips from Samsung. In the future, Apple is planning to use its own custom-designed modem chips, but Apple-designed modems won't be ready for "another few years."

Blackstick
I try not to read the tea leaves... he's been there 13 years as an executive, I made tens of thousands just with average, retail Mac Genius ESPP... this dude could buy an island with his grants ... if he's in his 50s he has 20-30 good years of health left, I'd use them.
Score: 22 Votes (Like | Disagree)

hermes16
Is it me or is there quite a few execs and other high talent individuals leaving all at once?

melgross
Remember that Apple just hired Intel’s chief of 5G design. Did they do that because Caballero was leaving, or did Caballero leave because they hired that guy?
Score: 11 Votes (Like | Disagree)

JPack
Probably left for Qualcomm to get a bigger paycheck. Some engineers also prefer to work for companies more geared towards pure R&D. Now that Qualcomm has secured income from Apple, they're probably in an even better position to poach engineers.
Score: 5 Votes (Like | Disagree)

Baymowe335
Laughing at all the people who think the only reason to leave is you're fed up.
Score: 5 Votes (Like | Disagree)

I wonder what Qualcomm's secret recipe is?

Pursue modem excellence as if the company depended on it instead of dabbling like a dilettante.
Score: 3 Votes (Like | Disagree)
Read All Comments

Friday June 18, 2021 9:41 am PDT by Sami Fathi
After a long wait, YouTube for iOS is officially gaining picture-in-picture support, allowing all users, non-premium and premium subscribers, to close the YouTube app and continue watching their video in a small pop-up window. In a statement to MacRumors, YouTube says that picture-in-picture is currently rolling out to all premium subscribers on iOS and that a larger rollout to all US iOS...
Read Full Article • 142 comments

Friday June 18, 2021 2:06 am PDT by Sami Fathi
Intel may see its market share fall to a new low next year, in large part thanks to Apple's decision to move away from using Intel processors in its Mac computers and instead use Apple silicon. Apple announced last year that it would embark on a two-year-long journey to transition all of its Mac computers, both desktops, and laptops, to use its own in-house processors. Apple is expected to...
Read Full Article • 154 comments

Friday June 18, 2021 6:59 am PDT by Sami Fathi
Apple supplier TSMC is preparing to produce 3nm chips in the second half of 2022, and in the coming months, the supplier will begin production of 4nm chips, according to a new report from DigiTimes. Apple had previously booked the initial capacity of TSMC's 4nm chip production for future Macs and more recently ordered TSMC to begin production of the A15 chip for the upcoming iPhone 13,...
Read Full Article • 120 comments