Samsung today announced that its 2019 TV lineup with QLED 4K and 8K options, can now be pre-ordered or purchased from the Samsung website or from select retailers across the United States.

Available in sizes ranging from 43 inches to 98 inches, the QLED lineup works with AirPlay 2, thanks to Apple's move to expand ‌AirPlay‌ 2 availability to many television manufacturers. ‌AirPlay‌ 2 will allow Apple users to stream music, podcasts, and more directly to Samsung TVs. 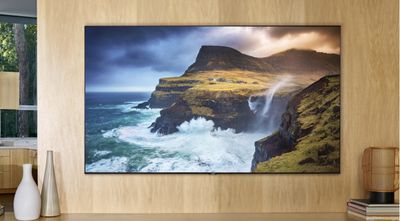 Samsung's 2019 TVs will also feature a new iTunes Movies and TV Shows app, allowing iTunes content like movies and TV shows to be accessed directly on a Samsung television set.

Existing 2018 smart Samsung TV sets will also get ‌AirPlay‌ 2 support and the iTunes app through an upcoming firmware update. Samsung plans to debut the new iTunes Movies and TV Shows app in more than 100 countries, while ‌AirPlay‌ 2 support is set to be available in 190 countries, but specific timing has not yet been announced.

According to Samsung and Apple, all 2018 and 2019 4 Series, 5 Series, 6 Series, 7 Series, 8 Series, and QLED Series TVs will work with ‌AirPlay‌ 2, and presumably, those television sets will also get the iTunes app. Other smart TVs with ‌AirPlay‌ 2 support will also work with HomeKit, but Samsung's televisions will not feature ‌HomeKit‌ integration and will not be listed in the Home app.

Many of the other 2019 television sets are not available for purchase on Samsung's site but should soon be showing up on websites for various retailers like Best Buy, B&H Photo, Amazon, and others.

QLED: just LCD with local dimming, but it sounds cool and confuses uninformed consumers who think they’re getting a great deal on an OLED.

Liquid Retina: Just LCD with curved corners, but it sounds cool and confuses uninformed consumers who think they’re getting a great deal on a better type of display
Score: 11 Votes (Like | Disagree)

calzon65
I think it's so misleading that Samsung uses the term QLED; the uninformed public is lead to believe this may somehow be similar to OLED … which is it not!
Score: 10 Votes (Like | Disagree)

QLED: just LCD with local dimming, but it sounds cool and confuses uninformed consumers who think they’re getting a great deal on an OLED.

(That said, if someone can't tell the different between a Q and an O, or don't bother research the technology differences before they spend two grand or more on a TV, they get none of my sympathy).
Score: 8 Votes (Like | Disagree)

I think it's so misleading that Samsung uses the term QLED; the uninformed public is lead to believe this may somehow be similar to OLED … which is it not!

chewbaka
QLED: just LCD with local dimming, but it sounds cool and confuses uninformed consumers who think they’re getting a great deal on an OLED.
Score: 6 Votes (Like | Disagree)

macduke
There is no reason for anyone to need an 8K TV at 65" if you're using it as an actual TV. With 20/20 vision you don't even get the full benefit of 4K at 65" in a typical living room. For instance, at 6ft away from the TV, you would need a 100" TV to start to see a difference over 4K. There are actual calculators and charts online that will tell you this. And that's just to start—it's not even anywhere close the full benefit of 8K at that huge size and close distance. Perhaps it could be used as a computer monitor, but that just sounds nuts and possibly painful to look at a screen that big that close all day, having to move your head all around. I hope consumers aren't going to fall for this 8K BS.
Score: 5 Votes (Like | Disagree)
Read All Comments

Saturday May 21, 2022 9:00 am PDT by Hartley Charlton
With around four months to go before Apple is expected to unveil the iPhone 14 lineup, the overwhelming majority of rumors related to the new devices so far have focused on the iPhone 14 Pro, rather than the standard iPhone 14 – leading to questions about how different the iPhone 14 will actually be from its predecessor, the iPhone 13. The iPhone 14 Pro and iPhone 14 Pro Max are expected...
Read Full Article • 362 comments