Today is Earth Day, an annual event celebrated around the world that brings attention to various environmental causes. Apple is taking part in the event in a variety of ways, from green Apple logos in retail locations to providing an update on its mission to conserve mangrove trees in Colombia. 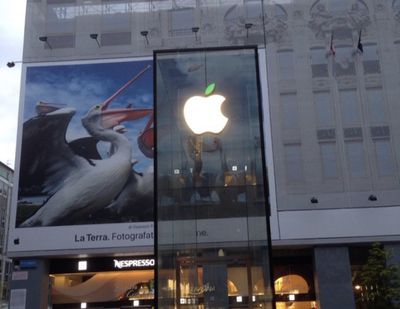 Image via @SetteBIT
As it does every year in its retail stores, Apple has turned the leaves of the Apple logo green in honor of Earth Day. Select locations have also provided workers with green t-shirts to mark the event, and all Apple stores today will promote environment-themed Today at Apple sessions.

The company is also hosting an Apple Watch challenge today, asking users to get a 30 minute workout done before the day ends. Apple usually hosts Activity Challenges for major holidays and well-known events, and for the past several years there's been an Earth Day Challenge with the same goal as 2019 -- complete a 30 minute workout.

Apple today also shared a press release that provides an update on its efforts to preserve the mangrove trees in Cispatá Bay in Córdoba, Colombia. Last year on Earth Day, Apple partnered with Conservation International to protect and restore Cispatá Bay, due to the area's importance in the battle against climate change. "Globally, we've lost half of the world's mangrove forests since the 1940s," said Apple VP of Environment Lisa Jackson. "So it's high time we start preserving and protecting them."

Happy #EarthDay everyone! What a beautiful world we live in. Let’s all embrace our shared responsibility to each other to take care of our one and only planet Earth. Photos #shotoniPhone by @EstherHavens, Sarah Norvell, Jason Barnes and @VincentRiemer. pic.twitter.com/E3chOkkeEl — Tim Cook (@tim_cook) April 22, 2019

The company has also marked Earth Day across its services. Beginning with Apple Music, the Mixtape for Mother Earth has been refreshed this year with curation by Jaden Smith. It includes tracks like "Come Together" by The Beatles, "Summertime Magic" by Childish Gambino, and more. Jaden joined his parents Will and Jada at Apple Park last week to discuss the environment and Jaden's company, Just Water.

Apple is also marking down a collection of environmentally-friendly films on iTunes Movies in a new sale. This includes a suite of Disneynature documentaries for $9.99, and films focused on climate change, the natural wonders of the planet, and animated features for kids with environmental messages like Wall-E and FernGully.

A similar section has appeared in iBooks as well, providing readers with books themed around the environment. These include books that allow you to "Explore the Natural World," "Get Informed," "Do Your Part," and a section focused on kids' books like Dr. Seuss' "The Lorax" and "Curios George Plants a Tree."

The company continued its environment-friendly announcements later in the month by revealing a new "Material Recovery Lab" had opened in Austin, Texas, dedicated to looking for innovative solutions that will improve on traditional methods of recycling. Apple also revealed a major expansion of its recycling program, quadrupling the number of locations where United States customers can send their ‌iPhone‌ to be disassembled by its recycling robot Daisy, which was introduced around last year's Earth Day.

BigBoy2018
They should celebrate it by releasing laptops that are upgradeable and dont cost 1/3 the price of a new one to replace the faulty keyboard.
Score: 14 Votes (Like | Disagree)

simonmet
When you see the extent to which Apple goes to to thwart upgrades and repairs, it’s a bit hypocritical of them to claim to be this green, earth-loving company.
Score: 14 Votes (Like | Disagree)

I'm celebrating Earth Day by eating only things grown in or on the Earth. Apples and cows are in, asteroids and moon cheese are out.

I’ll celebrate Earth Day the same as I do every year. I burn a tire.
Score: 8 Votes (Like | Disagree)

JetTester
I'm celebrating Earth Day by eating only things grown in or on the Earth. Apples and cows are in, asteroids and moon cheese are out.
Score: 7 Votes (Like | Disagree)

mi7chy
Instead of ineffective marketing spin, how about making products more durable so they don't unintentionally bend/malfunction, future proof specs like DRAM so it's not engineered for disposable obsolescence and software that doesn't prematurely gimp the device like unbundling Safari from iOS updates?
Score: 6 Votes (Like | Disagree)

hermes16
Once again Apple is in the news about social issues and not it's products.
Score: 6 Votes (Like | Disagree)
Read All Comments