Just Water is a water company that sells ethically sourced spring water in paper-based bottles with sugarcane caps, all of which is more environmentally friendly than a standard plastic bottle. In addition to plain spring water, Just Water also offers infused flavors like lemon, tangerine, and apple cinnamon. 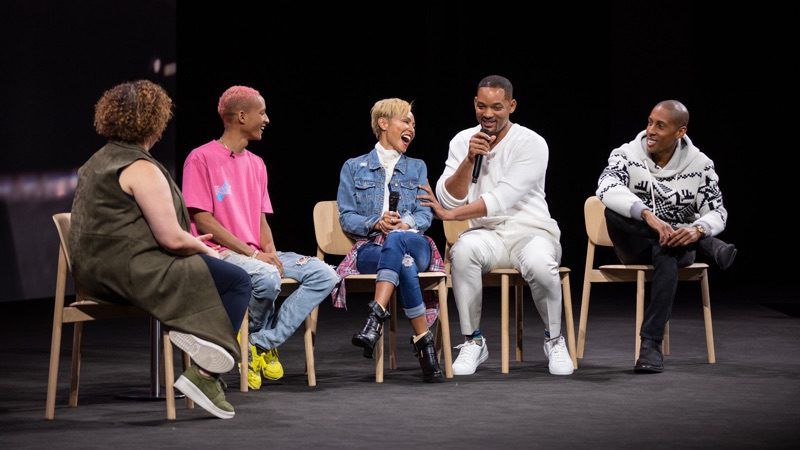 Everyone deserves access to quality water. Thanks for the leading the charge, @officialjaden, and for sharing your passion for the environment with us today at ‌Apple Park‌. Your enthusiasm is contagious! 🌎 pic.twitter.com/2juv8zxMWT


The Smiths were at ‌Apple Park‌ ahead of Earth Day, which takes place on Monday, April 22. Apple today also released its annual environmental report and launched its Material Recovery Lab in Austin, Texas.

In celebration of Earth Day, Apple plans to host environment-themed Today at Apple sessions at its Apple retail stores. The company will also feature original stories and app collections in the App Store and will host an Earth Day Apple Watch challenge.

DTphonehome
How much you want to bet these paragons of environmental stewardship flew in on a private jet?
Rating: 121 Votes

trip1ex
i drink out of the faucet.

something rubs me the wrong way about apple promoting some this water business from a kid with super wealthy parents.
Rating: 43 Votes

calstanford
Wow Tim I am REALLY glad you invite some REAL experts for this. Shows dedication and seriousness. Kudos!
Rating: 42 Votes

i drink out of the faucet.

something rubs me the wrong way about apple promoting some business of a kid with super wealthy parents.


And Scientologists. Next stop, a GOOP channel. With Oprah, a Dr Oz quackery channel. This stockholder doesn’t approve of what I’m seeing so far. I want a science-based Apple, not pseudoscience woo Apple
Rating: 29 Votes

bwillwall
Is the environment even real?
Rating: 27 Votes

J.Dillinger
How ironic that Apple is moving iPhone production to India, a second world country, that pollutes the Earth without a care.
Rating: 26 Votes

laurim
They burn down sugar cane fields before harvest. Lots of pollution. And traditional paper production involves a lot of chemicals to break down wood pulp. I’m all for not using plastic but I’d have to hear more production details before I hand out awards. Too many non-scientist “Environmentalists” do what they *think* helps, not what actually helps. They simply don’t know enough about it and make choices based on mythology, not science. Also, organic farming is usually worse for the environment than traditional farming and their claim that alkaline water has health benefits is pure quackery. As soon as it hits the acid in your stomach, it’s gone. The body strictly maintains blood pH through buffering. If anything we consumed could actually change blood pH, we would die. So much wrong here
Rating: 24 Votes

needsomecoffee
Nothing says environmental consciousness more than packaging water into small containers, loading it on trucks, shipping it around the country to stores people drive to for purchase. Very green solution vs. the water that flows from taps at home/office which for 90+% of Americans is essentially the same (or better quality) as the Smith's "Just Water". Unflavored of course. Actually, that does sort of fit Apple's definition of being green in a way...
Rating: 23 Votes