Apple acquired the rights to the "Time Bandits" series back in the summer of 2018. The original show featured the story of an imaginative 11-year-old boy named Kevin who was sucked into a fantastical adventure with a band of dwarves during the Napoleonic Wars in Italy.


Kevin and the band of dwarves travel through time using a magical map, visiting ancient Greece, the Titanic, and more, all while fighting off an evil being intent on stealing the time travel map. 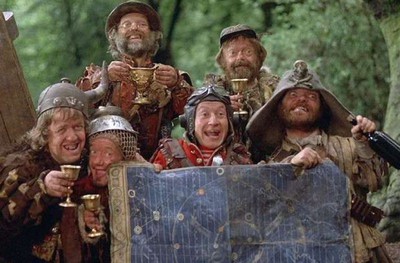 7thson
This is promising news. Probably the first I’ve heard that makes Apple’s foray into tv/movies that sounds intriguing.
Score: 13 Votes (Like | Disagree)

jedifaka
Sure wish the movie industry - even the newest studios - would let go of the obsession with remakes. People are out there writing scripts all the time. Surely there's something worth making. Something we haven't seen before.
Score: 9 Votes (Like | Disagree)

Attirex
Time Bandits movie is an often-overlooked gem. Love it.

Millennials: Time what movie? Is it on Grindr?
Score: 7 Votes (Like | Disagree)
Read All Comments

Tuesday May 11, 2021 5:06 am PDT by Hartley Charlton
Apple's next MacBook Air will feature a completely new design and come in a range of colors like the 24-inch iMac, according to leaker Jon Prosser, who has now released supposedly accurate renders of the new machines based on leaked images. In a new video uploaded to YouTube channel Front Page Tech, Prosser elaborated on his previous prediction that Apple's next-generation MacBook Air models ...
Read Full Article • 104 comments

Tuesday May 11, 2021 11:56 am PDT by Joe Rossignol
Last month, Apple introduced a new iPad Pro with the same M1 chip found in the latest Macs, and early benchmark results indicate that the M1 iPad Pro is over 50% faster than the previous-generation iPad Pro. Based on five legitimate Geekbench 5 results (here's the fifth) for the fifth-generation 12.9-inch iPad Pro with the M1 chip, the device has average single-core and multi-core scores of...
Read Full Article • 346 comments