iPhones with aftermarket batteries installed by third-party repair shops are now eligible for service at Genius Bars and Apple Authorized Service Providers, according to an internal Apple document obtained by MacRumors from three reliable sources. The change was first reported by French blog iGeneration. 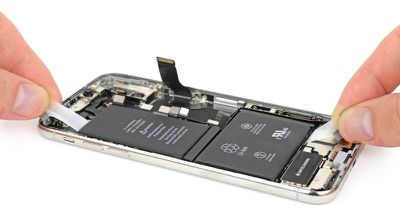 iPhone X battery with pull tabs via iFixit
This is significant news for ‌iPhone‌ repairs, as the Genius Bar and AASPs were previously instructed to deny service of any kind for an ‌iPhone‌ with a third-party battery, regardless of the circumstances.

If the repair is unrelated to the battery, the Genius Bar and AASPs are now instructed to ignore the third-party battery and proceed with service as normal, according to Apple's internal document. This could include repairs to the display, logic board, microphones, and so forth, with normal fees applying.

In the event Apple cannot safely remove a third-party battery due to broken or missing battery tabs or excessive adhesive, the customer is entitled to an ‌iPhone‌ replacement at the standard whole-unit out-of-warranty price.

This decision proves that now, more than ever, the third-party repair ecosystem is an integral part of maintaining Apple's high-quality customer experience. If Apple is getting enough third-party repaired phones for a policy change, they clearly don't have the reach or capacity to maintain all the iPhones that they've sold. All of us, including Apple, benefit from the service provided by the repair community.

Apple similarly loosened its repair policy for iPhones with third-party displays back in February 2017.

Updated on March 7 with minor correction about whole-unit replacement fee.

This is why Apple service is the best.

This is why Apple service is the best.

Apple shouldn't have denied repairs in the first place. That would have been good service.

I'm wondering if Apple's hand has been forced due to changes of law / threatened law suits in one or more countries?
Score: 20 Votes (Like | Disagree)

Ok.. let's not get ahead of ourselves...

I agree with him. I’ve never been disappointed. Many’s the time where they’ve just handed me a new iPhone or iPad and sent me on my way. I’ve found if you know what you’re talking about (“here’s exactly what’s wrong, here’s how I know that this is the issue because here’s everything I’ve tried”) and polite, they treat you very well.
Score: 10 Votes (Like | Disagree)

PieTunes
Good on Apple. This is welcome news for those who find themselves in a relevant situation.
Score: 9 Votes (Like | Disagree)

avanpelt
By not servicing those devices, they were missing out on more revenue on out-of-warranty devices. Every dollar counts.
Score: 9 Votes (Like | Disagree)
Read All Comments